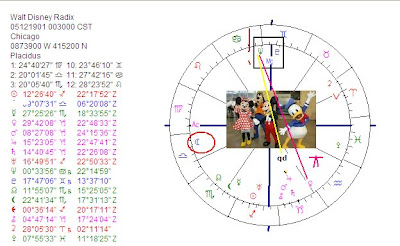 Walt Disney had a special kind of magic art and still the main pattern for an artist is visible in his chart. Venus, Neptune and Moon in a sign ruled by Venus or Neptune are linked or prominently placed in the charts of artists and so it is in the chart of Disney.

1. Neptune is elevated and 'calling' (not making major aspects in sign or orb 5 degrees)
2. Venus is inconjunct this prominent Neptune
3. The Moon is in Libra

For the audience and public we see the connection between Jupiter and Neptune, a quindecile telling us that there is a strong focuss (almost an obsession) to have that public and those fans.

For the magic in his art I see the Midheaven between Neptune and Pluto. The Neptune-Pluto connection is the 'silent force' and often prominent in the charts of magicians and all those who impress with what others consider to be miracles.