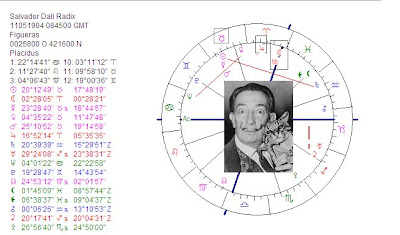 Salvador Dali was an artist and a peculiar one. He was born in Figueras, on May 11, 1904 at 8h45 a.m. with Moon conjunct Midheaven, Jupiter oriental, Uranus square Aries Point and 'calling'(not making Ptolemaic aspects in sign or orb 5 degrees). Moon, Jupiter and Uranus- combinations bring up flashing good insights and ideas. He had them. And he was controversial and excentric at any possible level (the 'calling' Uranus!). But where is the artist in his chart?

Venus is in Taurus and rules the Midheaven. Venus is sextile Neptune. That is it.

MORE AND MORE AN ARTIST...
Salvador Dali was about 10 when he started to draw with the help of Ramón Pichet, an artist and friend of his father. That was when his progressed sun sign - and so his life style - changed and when progressed Venus and Mercury came together in conjunction. A conjunction is the start of a process. In this case of 'schooling - Mercury - in arts - Venus-'. Chiron was on the DESC in the progressed chart. Chiron is often involved in a life changing meeting.

In 1921 he started his studies in Madrid with Jupiter ruler 5 conjunct Midheaven in the progressed chart. He started to become known.
In 1929 he went to Paris and met Pablo Picasso. That is when the sign on his progressed Midheaven changed into Taurus, sign ruled by the planet of talent and style Venus.

Salvador Dali's progressed chart shows that he GREW into his position as a professional artist, and that circumstances and other persons contributed to developping an artistic careeer. Maybe that is why the Moon, planet of education, is on his natal MC and Jupiter, planet of studies, is on top.

and for his enormous successes: