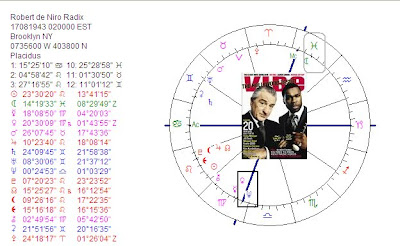 The natal chart of Robert de Niro is such a good example of the Venus-Neptune pattern in the charts of artist, that I just had to post this chart. Venus and Neptune are each on one side of the axis MC-IC. Neptune rules the Midheaven and is also opposition Aries Point. Neptune does not make any Ptolemaic aspects in sign or orb 5 degrees. And that makes Neptune even more prominent than Venus is.

There is more of course. The Moon is in Pisces, square Mercury and Mercury conjunct Venus. Jupiter is the oriental planet in this chart. The prominence of Venus, Jupiter and Neptune reflects the crowd of female fans.
Gepost door Astromarkt op 13:54