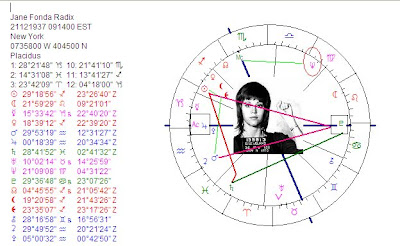 Jane Fonda, born December 21, 1937 in NY at 9:14 a.m. EST is an actrice and an activist. This blog is about the artist and the pattern of talents in the natal chart. We see the actrice in her chart in 10 ways:

1. Neptune oriental
2. Venus square Neptune
3. Moon inconjunct Neptune
4. Moon trine Venus (sense of art)
Those are the usual indications in the charts of artists and actors.

5. Neptune sextile Midheaven (a career related to the immaterial things in life)
6. Moon square Midheaven (a career related to family: her father is Henry Fonda)
7. Mercury (ruler of the 5th house of games and play) 'calling': creative communication at any possible level
8. Venus quintile Mars (creative passion)
9. Sun square Aries Point (drawing attention)
10. Venus and Neptune are on either side of the Midheaven (both elevated)

SUN, MARS, SATURN, PLUTO and Mercury...
There is a combination of Sun, Mars, Saturn and Pluto in her chart that might implicate 'having to deal with hard confrontations in life'. As Mercury is involved (Mercury is quindecile Pluto, for example) communications is involved and strong, fixed opinions and Mercury also relates 'younger years' to this combination. There is a triple midpoint combination of Mars, Saturn and Pluto in her chart! This means that unnatural death is a theme in her life. And it might just refer to the suicidal death of her mother (when she was only 12). The YOD of Sun and Mars with Pluto is very tight and refers to political struggle and perhaps also to being a fitness guru.

URANUS
'Hanoi-Jane' was her nick name, because she travelled to Hanoi during the war in Vietnam. That made her a controversial person (see Uranus 'calling' in her chart: there are no Ptolemaic aspects within 5 degrees of orb and at the lowest spot in the chart). Nevertheless she managed to be accepted as an actrice again and I think she ought to thank the calling Jupiter on her Ascendant for that. Jupiter in Aquarius does not make a major aspect in sign, but IS making aspects out of sign with the Sun, Mars, Saturn and Pluto. Those are exactly the planets that indicate hard confrontations. Jupiter (ruling the house of friends) always helps.

FAME
If you didn't know that Jane Fonda was famous, you could know it by looking at the chart with Jupiter and Pluto on the horizon. Jupiter is the most prominent planet of those two and Jupiter promises confidence and progress. The Moon and Midheaven are related to the midpoint Jupiter/Pluto in the 22.5 degree range. So there is Jupiter and Pluto on the horizon, Jupiter/Pluto is related to the top of the chart and Jupiter/Pluto is related to the Moon. That makes her a special person among those born on December 21, 1937. Exactly at her time of birth fame was all around.
Gepost door Astromarkt op 07:59