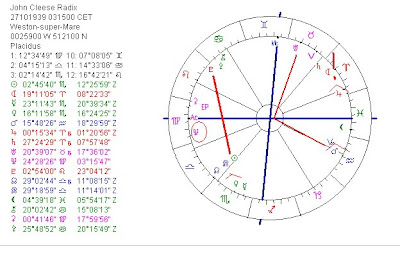 John Cleese (born 27th October 1939 at 3:15 CET in Weston-super-Mare) had a bad relationship with his mother (and she lived to be 101). John Cleese is not easy (Sun tightly square Pluto) and with Mars square Uranus he has a temper. Just like his alter ego Basil Fawlty:)
The Moon in his chart is calling! and in the eight house. That could indicate the problemous relationship with the mother, at any possible level! A calling Moon is also a recipe for acting.

ARTIST
John Cleese is a prominent artist. Neptune is oriental and Venus is sesquisquare Aries Point for the combination of Venus and Neptune: artistic talents. Acting might be contributed to the calling Moon. And Notice Jupiter on Aries Point, sesquisquare Mars. John Cleese has 5 out of 10 prominent placements in his chart. The combination of Jupiter and Neptune often goes together with a career on stage, talking to an audience or having a public using it's imagination.
Gepost door Astromarkt op 03:11