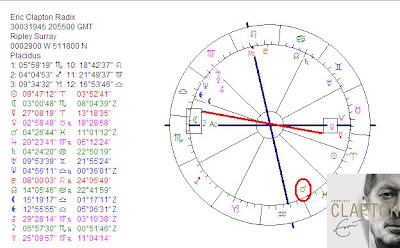 Eric Clapton's chart of course has the same artistic pattern as the charts of other artists have. He has:

1. The Moon on the Ascendant (for the 'act')
2. Venus on the Descendant (for the vital importance of style)
3. Moon opposition Venus (for sense of art)
4. Venus strong in Taurus
5. Venus inconjunct Neptune (for artistic talents)
6. Venus is the final dispositor of the MC in Leo
7. Mercury and Jupiter are calling! (not making aspects in orb 5 degrees in sign) and Pluto is on top...that creates a prominent combination of planets indicating success
8. Venus is semi quintile Uranus (for sense of rhythm)

The placement of the opposition of Moon with ruler 10 Venus on the horizon of this chart made it hard to miss the sense of art in Eric Clapton...

I have noticed that when 'hitting' is involved in arts (drums or guitars) Mars is important. The Mars of Eric Clapton is related to Sun/Moon and in Pisces, the sign of arts. That could be read like this: striking the artistic way is what he wants deep in his heart. It has something to do with sexual attraction as a male and when you think of all those men pretending to play the guitar and feeling good at it, maybe that explains:) With Mars trine Saturn it must be easy for him to hit hard. He started his career working in the world of construction (Mars-Saturn), together with his grandfather (Mars-Saturn again). Another interesting aspect is Sun opposition Neptune, often symbolizing secrets and the ability to fake and be empathic that is very welcome in the charts of actors. 'A vivid imagination' is another way of reading this aspect.

Wikipedia mentions 1966 as the year of great development (and founding of The Cream). That was when his progressed Sun changed sign (together with his life style). The sign of the progressed Sun was Taurus, ruled by Venus, planet of the artist.
Gepost door Astromarkt op 10:19