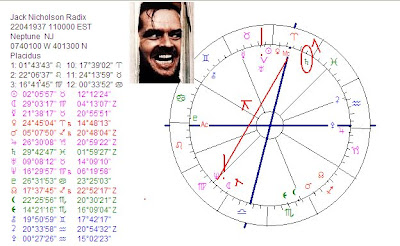 The birth chart of Jack Nicholson has a strong potential for an actor. He draws attention and is a star (a calling - no major aspect in sign - Sun on top) and a calling*) Neptune (for the amorphous or for the romantic life) joins the Sun in prominence. They are a sesquisquare away from each other for a sometimes frustrating double life in a different role. The Moon in Virgo is opposition Aries Point and Saturn. An important Moon is perfect for anyone who needs to 'pretend'.
The Midheaven leads us to Venus in Aries and we see Neptune inconjunct the Midheaven and semi square Ascendant. Venus is semi square the midpoint ASC/MC.

So there are several indications that this man had a 'call' to be an actor in the movies (Sun with Neptune in prominence) and that he had the need to be known as a 'pretender'(Moon opposition Aries Point). With Venus related to ASC/MC he is all in all an artist.

I like to point at ruler Midheaven (Mars) in the fifth house in Sagittarius that does not only lead us to his professinal field (plays) but also relates to his life as a play boy. It seems he had sex with over 2000 women. Mind if I blame Venus square Pluto? This aspect intensifies sympathies and antipathies. As Jupiter is opposition Pluto an astrologer could be challenged to read this as being loved by many and have his ideas about that. Generally it just means that you are very very popular. And he is.

RELATED:
See the article on Astromarkt about Venus and Pluto

*) I name a planet 'calling' when the planet doesn't make tight Ptolemaic aspects like conjunctions and trines, squares, oppositions or sextiles. It means that the planet's function will be mirrored at any possible level, somehow, anyhow. When it is Neptune, there will be an enormous fantasy and ability to fake, (make) belief etc.
Gepost door Astromarkt op 13:14