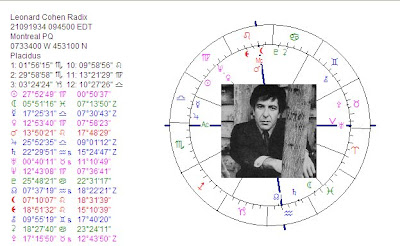 Leonard Cohen's 'Hallelujah' is the number one hit in the UK Top 40. Maybe this hit helps to cover the losts that he had in 2005, when his manager ran off with millions of his pension fund. Jupiter was opposition Midheaven in his last solar return chart and transit Jupiter will soon be trine his natal Sun: those are good signs!

In his natal chart Venus and Neptune (conjunct) are rising before the Sun and 15 degrees away from the Sun to indicate artistic talents. The Moon is in Pisces for the need for romance and dreams.
This picture of the sky at the time of his birth corresponds with that in the charts of other famous artists and musicians. It is the pattern of the artist.

BTW Rythm is important for a poet (and he is a poet) and rythm is symbolized by Uranus, on the Descendant. Also notice that Mercury and Venus are in mutual reception (in each other's sign). That means that he has a beautiful voice. Venus and Mercury are the end dispositors of the MC vocational routing. And my final observation: his prominent Neptune rules the 5th house of entertainment...
Gepost door Astromarkt op 10:00