This is the chart of Tony Curtis with transits and progressions for the day after hospitalization (July 13, 2010). Tony Curtis is an actor. The pattern of artistic talent (composed by Venus, Moon, Neptune, the signs that they rule and an aspect with Midheaven) is clear: 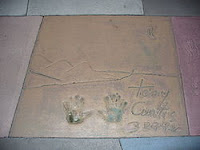 Venus is sextile Neptune and trine Moon
Moon in Libra is semi sesquisquare Neptune
Pluto is ruler of the 5th house of performance and is in a tight square with Midheaven
Final dispositors of Midheaven: Mercury-Venus in mutual reception (talent for communications)
His progressed Sun changed sign about 4 years ago, when he contractred pneumonia and was in coma for several days. Now he uses a wheelchair. Yesterday he had health problems again and was taken to hospital.
Gepost door Astromarkt op 00:22 Geen opmerkingen:

The pattern of artistic talent*) in the chart of Roman Polanski is made like this:

The Sun is conjunct the midpoint of Moon and Venus and of Moon and Jupiter. Also Jupiter is conjunct Sun/Mars. This huge amount of indications for success and protection helped him to survive World War II and brought him successes. Jupiter, the planet of protection and of 'abroad', is half semi square AC/MC and semi square Sun/Moon. He managed to get out of the hands of justice by living in France. The position of Jupiter in the 12th house has been seen more often in the charts of those who find asylum in another country (like Kaiser Wilhelm, for example). Polanski originated in Poland.