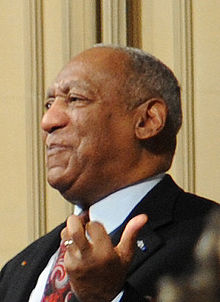 If this was not the chart of Bill Cosby, but of any other man, it would be the chart of an optimist, a positive person, an international above all with an independent view. Jupiter and Uranus are prominent in this chart. They symbolize the helicopter view and the inventive mind. I also like Mercury quintile Uranus (a creative way of saying controversial or new things ....or creating new ideas and words).
And what’s that Quaoar doing, inconjunct his Ascendant? Maybe creating a new perspective (but a little ‘overdone’:)?
Perhaps there is more to mention, like the combination of Mercury, Jupiter and Pluto for the successful communications. But I stop here. A positive role model, motivated by the family and working with talent, creatively entertaining the public...that is how one can work with the possibilities of this natal chart. It can even be 'done' shorter: he has the capability (biquintile) to enjoy (Venus) the public (MC) and make people laugh.
When he started his career in entertainment, transit Pholus and transit Jupiter were opposition his progressed Sun. He was at a positive turning point in life! That was 50 years ago and he's still working!
Gepost door Astromarkt op 04:41 1 opmerking: 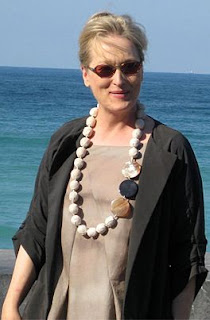 Meryl Streep has the role of the main character in the movie about Thatcher and really: they managed to make her look like the former PM! For an obvious reason there is a relationship between the actor and the person that he/she is impersonating. And so it is in the case of Margaret Thatcher and Meryl Streep.
Meryl Streep and Margaret Thatcher both have an aspect between Sun and Jupiter (Meryl the inconjunction, Margaret the square). They also both have an aspect between Sun and Pluto (Thatcher has the square again, Meryl Streep has a semi square). The combination of Sun with Jupiter and Pluto increases self confidence and is one of the keys to success (or is it the result of it? One never knows…)
Of course, they are very different. Their charts are also different. But there is another similarity. Both ladies have Mars rising before the Sun and that is typical for ‘iron ladies’ (as Mars is the symbol of iron, male energy and drive). You might say that both are driven and successful or driven by (towards) successes.
Their synastry doesn’t show much of a ‘relationship’. The Sun in Libra (Thatcher) doesn’t match the Sun in Cancer (Streep and their Moons are in Leo (Thatcher) and Taurus. But the Mars of Margaret is trine the Mars of Meryl, so that they could be working together (and in fact, they have a relationship in the professional field).
One of the differences: Mars with Ascendant/MC midpoint of Thatcher and Mercury with Ascendant/MC midpoint of Streep (communicating is a crucial factor).
It is a one time role (Streep as Thatcher), unlike that of Romy Schneider, who became the living Sisi.  Romy Schneider ‘was’ Sisi in a range of movies. Her Midheaven is square the Moon of Sisi of Austria, thus linking her works – MC- to the personality of Sisi. Tragically, just like Elisabeth of Austria, Romy Schneider lost a child and never got over it. The Midheaven of Streep is square the Sun of Margaret and opposition the progressed Moon of Thatcher (and the Sun of Streep is sesquisquare the Ascendant of the PM).  The progressed Midheaven of Streep is now trine the Sun and Moon of Margaret Thatcher. There is always a ‘connection’…http://www.astro.com/astro-databank/Main_Page
I mentioned Meryl Streep in:
http://astropost.blogspot.com/2011/03/all-you-need-is-venus.html about the importance of Venus when charts don’t match…
http://art-astrology.blogspot.com/2008/12/astrology-chart-of-meryl-streep.html about the pattern of artistic talents in her chart
The chart of Meryl Streep today has a Jupiter-Uranus ‘arrangement’. That is mirroring the commotion (controversy, too) and the great success of her latest movie. (BTW, Cancer has a rather good horoscope for 2012!: http://www.astromarkt.net/2012-2013-horoscopes.html

In her natal chart we see the pattern of professional work using an artistic talent in the exact square of Venus in Cancer with Midheaven and Venus in aspect with the Taurus Moon and Neptune in Libra. Also notice the angular Pallas.
I mentioned Margareth Thatcher, too:
http://astropost.blogspot.com/2008/05/birth-chart-margareth-thatcher-her-son.html
http://astropost.blogspot.com/2008/08/saturn-and-dementia-in-chart-of.html
The chart of Margaret Thatcher has a prominent angular Saturn on the Ascendant and in Scorpio, trine Pluto ruler one, as a sort of a statement for the ‘die hard’. In the progressed chart Jupiter is almost conjunct Ascendant (changing sign to Aquarius). Transit Saturn is about to square the progressed Ascendant.
Gepost door Astromarkt op 07:21 Geen opmerkingen: