Composer Andrew Lloyd Webber was born into an artistic family. That is why we see Ceres (symbol of the roots and genes) conjunct Midheaven (career, profession) and both conjunct Venus (talent, style).

The astrological pattern of artistic talent is build by aspects between Moon, Venus, Neptune and Midheaven and related to the signs ruled by Moon, Venus and Neptune. In the chart of Andrew Lloyd Webber the pattern is as follows:

The Sun doesn't make major aspects in sign and is positioned on Aries Point. That is an indication for drawing attention, for show, for leadership and for the 'star'.

This is not a complete reading of a chart. It is just to show you the major keys to the talent of this artist.
Gepost door Astromarkt op 12:28 Geen opmerkingen: 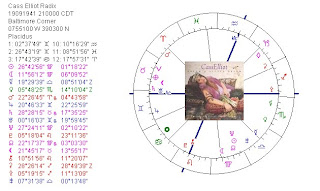 Cass Elliot was one of the Mamas & Papas and she died too soon, probably due to dieting or eating disorder she had a heart attack. She had a beautiful thrilling voice and we can see that in her chart: Uranus (thrilling) in Gemini (communication) and Uranus is the ruler of the Midheaven (the career). Venus, Jupiter and Pluto were aspecting the midpoint of motivation: Sun/Moon. It is the combination for big money and a lot of love. Notice the semi square between Jupiter and Pluto, indicating the wasted energy in that field. With Sun conjunct Neptune and trine Saturn ruler of the 8th house in the equal house system, there was a certain risk for illnesses and early swift death, related to nutrition (Ceres is in the 8th house!). In the year 1974 her progressed Sun was in the final degree of Libra and about to make an inconjunction with URanus, progressed ruler 8 in the equal house system. Also, the tighest aspect in her chart is the square between Venus in the sixth house of diet with Pluto, reflecting the price you pay for beauty and pleasure. More about aspects between Venus and Pluto on my site Astromarkt...

For the artist we seee that Neptune is rising before the Sun in a tight conjunction with the Sun. The Moon (unaspected!) is inconjunct Midheaven, Neptune is sesquisquare and Venus is square Midheaven. But there is no connection between them (though there is a 15d distance between Moon and Neptune). It is like if there is no such need for ideal beauty or pleasure, but that it is the career related to beauty and pleasure and sweet dreams.

Cass Elliot was a big woman and food killed her. I think that Ceres is the key, because Ceres is in the eight house, inconjunct Saturn and square Sun-Neptune. The combination of Sun-Saturn-Neptune is the combination of being ill or sick. Ceres is the symbol of nutrition (and genes). Something was wrong and Uranus on the Ascendant is a perfect way to express that her presentation (looks) was just as special as her voice was. Uranus is not making aspects in sign or orb 5 degrees, so that Uranus is 'calling', making her special at any possible level, anyhow!

On YouTube they have a clip of one of the best songs of the Mamas and the Papas: Safe in my garden, that you can hear here...http://www.youtube.com/watch?v=-chvVBrqwOc
Gepost door Astromarkt op 12:42 Geen opmerkingen: 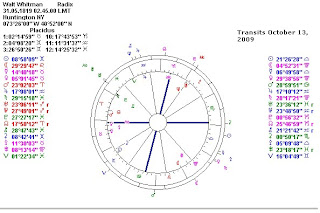 Poem hunter has a lot of poems by Walt Whitman on his site: http://www.poemhunter.com/walt-whitman/
Gepost door Astromarkt op 08:08 Geen opmerkingen: 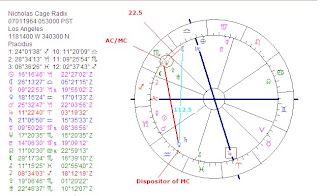 Actor Nicholas Cage has the Moon in Libra. This means that he has sense of style. It is one of the positions involved in 'the astrological pattern of artistic talents' that is based upon the aspects or relations of Moon, Venus and Neptune with each other and with Midheaven (to have an artistic career), like in the chart of Nicholas Cage.

There are aspects between Moon, Venus and Neptune.The Moon and Venus are 112.5 degrees apart. The Moon is half semi square Neptune. Venus is square Neptune. And all three of them are in aspect with the important midpoint AC/MC, while Venus rules the Midheaven. Here you see a complete pattern! His artistic talent (reflected by Moon-Venus-Neptune) is of importance for his career (Midheaven).

Neptune holds the most prominent position (rising before Sun and Mercury, the oriental planet) and Neptune is conjunct AC/MC (the strongest aspect with AC/MC compared to that of Moon - half semisquare - and Venus - square-).
Neptune is the planet of the movies.

Lately, Nicholas Cage seems to be short of money. In the progressed chart there is an upcoming inconjunction of Venus and Pluto. The inconjunction is reflecting lack of balance (and a risk or chance for something getting lost) while Venus-Pluto is the financial axis. 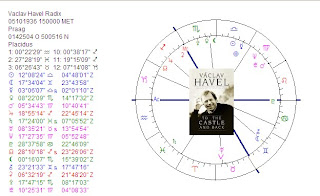 When you see the natal chart of Vaclav Havel (former President of the Czech Republic, born October 5 1936 at about 15:00 hours) you immediately see the political leader*). Perhaps that is why when we are asked who Havel is, we think of the President first.

But Vaclav Havel also is a playwright and poet (after studying drama). That part of Havel is shown by the fact that Mercury (planet of the writer) doesn't make major aspects in sign while Neptune's oriental position is reflecting the imaginary world of fantasy, beliefs and idealism. There is also the Moon in Gemini (need to communicate) in the 5th house of creativity, square Neptune (fantasy, fiction) and Neptune septile Venus. Venus is half semisquare and Neptune is quintile the Midheaven. Here we have a complete pattern of artistic talent used as a professon!

However, Mercury only makes a soft aspect with Midheaven. Pluto is trine Midheaven (out of sign) and Mars makes a square. His career involved political (Pluto) discussions (Mercury-Mars) and later in life he remained political active (Mars-Pluto). But I think he uses creative thinking to be good at it!

It bareley takes mare to describe a person who will always draw attention and who wants to be in the center of it (the star: Sun) and who is also a strategist when it comes to it (Pluto on an angle).
Gepost door Astromarkt op 07:01 Geen opmerkingen: 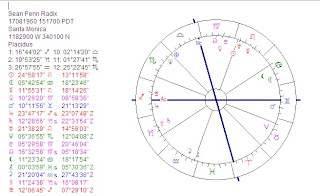 Can we see an artistic pattern in the chart of Sean Penn? Yes we can! And can we see why he is so often in the news for hitting a reporter? Yes, we can do that,too!

And of course he is a star (Venus in Virgo rules Midheaven, Mercury is in Leo, so is the Sun). The Sun is trine Jupiter (for self confidence) and quintile Neptune (for a creative lively fantasy). The combination of Sun-Jupiter-Neptune is frequent in the charts of those who have a devoted audience, such as movie stars have.

MARS QUINTILE URANUS
Sean Penn has Mars in Gemini, the sign of communications) quintile Uranus. That is reflecting a creative way to loose his short temper and to act immediately. Uranus rises before his Sun. Uranus happens to reflect 'news', too...
Transit Uranus is now inconjunct his natal Sun (disproportional upheaval). Reason enough for reporters to follow him and tell us about him.

More about the effect of Mars-Uranus on my site Astromarkt...
More about David Letterman's affairs on Astropost...
Gepost door Astromarkt op 02:14 Geen opmerkingen: 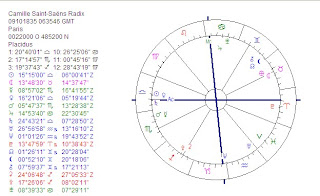 Notice that Venus is connecting the Midheaven, ruling the dispositor of Midheaven and making a minor aspect with Neptune. There is an artistic pattern. Here you see the amount of indications:

Sun and Moon are in signs ruled by Venus (Taurus and Libra)
The Ascendant is in Libra
The Moon is in Taurus
The Moon in Taurus rules the Cancer Midheaven
Venus is in Libra
Venus is the final dispositor of the MC-routing (Cancer, Moon in Taurus, Venus in Libra)
Venus is conjunct Ascendant
Neptune is conjunct IC
Venus is 105 degrees from Neptune (sextile + semisquare)
Cancer is on Midheaven
Uranus is inconjunct Midheaven (from the equal 5th house ruling the equal 5th)
Neptune is opposition Sun/Moon (a midpoint yod pointing at Neptune)

SATURN for classical
Camille Saint-Saëns is a classical composer. Saturn is conjunct his Ascendant and square his MC. His music had to be conform certain standards and was serious by nature. Saturn is important in the charts of classical musicians and singers. Their music has 'status' and is timeless. He was so serious that he thought that 'Carnaval des Animaux' should not be performed as it was not serious enough!

Even though Sun and Venus are in aspect with the combination of success (Jupiter and Pluto), he may not have regarded himself as a successful person. His two children died, and his marriage was a failure. Perhaps that is reflecting the influence of Saturn on the Ascendant. The Ascendant is the window to the outside world and to others. Saturn is the 'dementor' (using a Harry Potter idea:), chilling and depressing, too serious, too 'stiff' to be able to see the good things in life and on the other hand: bad luck. His father died before he was born, his children died and he ended lonely, with no other company than his pupil Fauré. Saturn is semi square the crucial midpoint AC/MC. Fatherhood and fathers (responsibility) is reflected by Saturn, too. So is being alone.

JUPITER for traveling
It is interesting to see that Saint-Saëns was more popular outside his own country than he was in France. Jupiter, planet of traveling, is rising before his Sun to reflect an international orientation. In his homeland he had a lot of competition coming from Debussy (whose Mars - the symbol of competition - is close to the Descendant of Camille Saint-Saëns). Edgar Fauré was his student.

Here you see a piece of his works that says more than words:
NME.com
Gepost door Astromarkt op 00:57 Geen opmerkingen: