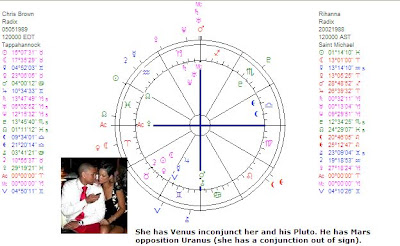 The pattern of artistic talent is clearly visibile in the astrology chart of the positions of the day of birth of Rihanna (February 20, 1988 in Saint Michael Barbados). This pattern is created by Moon, Venus and Neptune. In her chart Neptune is the first outer planet to rise before the Sun and that is reflecting an not materialistic (idealistic or romantic) orientation (such as artists have). The Moon is conjunct Venus for sense of style and beauty. Both are square Neptune (for sensitivity and artistic talent). And watch Mercury sextile Venus for the beautiful voice.

Unfortunately there are also indications for the importance of the theme of violence in her life. Observations: Mars is semi square Pluto and close to Saturn and Uranus. Look at the importance of Saturn conjunct Uranus (square Aries Point), both sextile Sun. Breaking free and limitations of freedom are to be important in her life.

Mars with Pluto reflects the issue of using or abusing violence (sometimes as a victim). Mars is also 105 degrees from Venus (for passion). Pluto is inconjunct Venus for the disproportional price she has to pay for love and fun and for earning money.. Venus and Mars related to Pluto tell us that passion is a problem.

Chris Brown (born 5th May 1989 in Tappahannock) has Moon and Venus close together in Taurus and just like Rihanna an oriental Neptune. His Pluto is square her Mercury and ...inconjunct her Pluto. So he is the price she pays. Or better said: men of her own years are to be avoided.
Also, his Mars is semi square Venus/Pluto (remember? her Pluto is connected to Venus and Mars, too. It means intense passion). Pluto always intensifies and sometimes makes life a drama.

There is another violent item that they share. Chris Brown's Mars is opposition Uranus for the short tempered guy. Rihanna has an out of sign conjunction of Mars and Uranus.

Conclusion: the violence in this relationship is reflected by the astrological birth data.

RELEVANT
Read about the combination of Mars and Uranus on Astromarkt. Or about sharing the same kind of aspects...There is also an article about Venus and Pluto.
Gepost door Astromarkt op 07:52