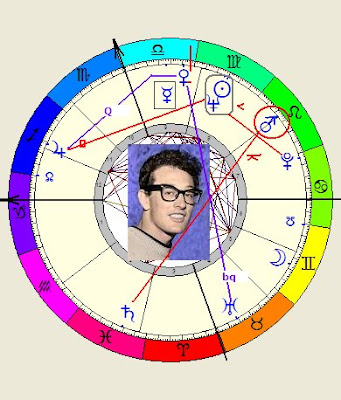 Buddy Holly died 50 years ago today (on February 3, 1959) in a plane accident and that didn't stop his popularity. He is a legendary pop artist. And how do we see that in the chart? 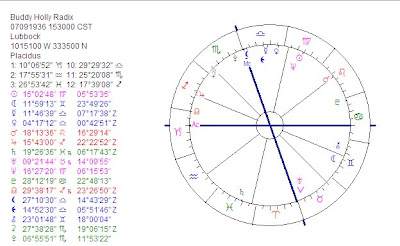 Notice: Mercury is on top of the chart (square Ascendant) in Libra. Next: Venus and Uranus are 'calling'(not making major aspects in sign or orb 5 degrees) AND Venus is biquintile Uranus for a creative sense of rhythm that singers seem to need.
What you see is creative and artistical aspiration (Venus biquintile Uranus), related to the carreer (Venus rules the Midheaven) with a nice voice (Mercury in Libra) above all (on top). Venus also rules the fifth house of entertainment. And Venus is 67.5 (semi square + half semi square) from the important midpoint Sun/Moon, so that he has style in body and soul.

More observations: he used an instrument (Mars is oriental). And he had several cominations that stimulate successes, such as Sun square Jupiter (very tight). The Sun-Jupiter combination is also related to Neptune and that is an indication for having a devoted audience (fans!). 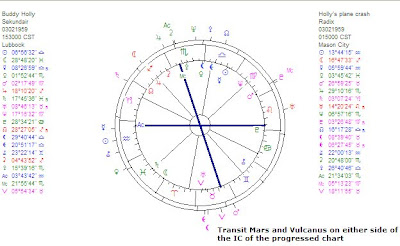 DEATH
This blog is about the pattern of artistic talent in a chart and not about dying. But the fact that Buddy Holly died so young made him remembered and eternal. That is why I like to point at Pluto square Midheaven, an indication that danger or death is related to the carreer. And I like to tell you about the impact of the prominence of Mars and Uranus. Mars-Uranus combinations refer to accidents, often. Read about it on my site Astromarkt.The prominent Mars and Uranus are afflicted and related to each other by means of midpoint combinations. Mars is in the eight house of life and death, ruling the 4th house of endings. Uranus is IN the fourth house. This refers to possible accidents. More explicit:

This oriental Mars (ruler of the 4th house of life ending) is in the eight house of danger, inconjunct Saturn ruler 1 and part of the midpoint yod of Northern Node opposition Mars/Uranus= Aries Point (known because of an accident together with others that ended (4) life (1)

On the day of his death, transit Saturn was sesquisquare his Mars (frustrating end of energy) and at the moment of the crash transit Uranus was 75 degrees from his midheaven (a shock), with transit Neptune septile Sun and biquintile Moon (perhaps unconsciousness). These are not uncommon aspects. But in HIS chart Mars happened to be an important symbol of death, being activated too soon.
Gepost door Astromarkt op 12:25