Void Moons are supposed to be bad moons*), but good and talented persons can have them. For example: Celine Dion. She is the vivid proof that the Moon in the final degree of a sign is a Moon rushing into the next sign. She was only 12 when her career started and she rushed to the world stages like her Moon in Aries rushed to Taurus**). 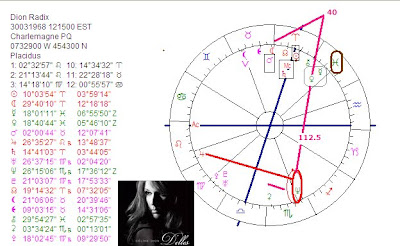 She was born in Charlemagne, Canada, on March 30, 1968 at 12h15 p.m. This moment and place places her Sun close to Midheaven and Mars (ruler Midheaven) exactly square ASCendant, opposition Ceres. Ceres has an important place in her chart. Ceres is the symbol of mother nature, nutrition, roots, genes and seed (the things related to females and nature). Celin Dion is not only a singer. She is also an entrepeneur. She established a franchise restaturant 'Nickels', in 1990. Now she has a perfume line. BTW, business: that is Saturn. Saturn is also the classical way in art.

SATURN
Saturn is EXACTLY conjunct her Midheaven. Often Saturn on MC reflects a break in the career (or a sudden end). Celine Dion stopped for two years to support her ill husband and to have a baby. I wondered if she will ever sing classical songs, as Saturn seems to reflect the classical way. And yes, I find that she wants to play the role of her idol Maria Callas in a movie (so I added 'actors' on the labels). Rumours say that she will sing with the Montreal Symphonic Orchestra! Anyway, Celine Dion sang about Maria Callas (La diva) on her album d'Elles. She is really a fan of the late soprano.

Now I found a business woman, someone working with food and feminine things, but I did not find the artist yet. Where is the artist in this chart?

JUPITER&NEPTUNE
The tightest aspect is Jupiter square Neptune; that is a good sign if you want to have listeners, fans and followers (and an indication for having a religious or idealistic conviciton). The Sun (conjunct Saturn and Midheaven) is opposition Jupiter/Neptune, so the Sun is the apex in a midpoint yod of Sun=Jupiter/Neptune. Jupiter is as far away from the Sun as Neptune is (sesquisquare). The light of the Sun says that she is performing or leading an audience. And Mars is also in aspect with Jupiter/Neptune and Sun (22.5 degrees, half semi square).

NO AIR
There is no placement in air signs and that is a good sign for communications at any possible level. It draws attention to Mercury (the planet of communications). Mercury is in the artistic sign Pisces (ruled by Neptune) and tightly conjunct Venus, planet of beauty and talents.

THE ARTISTIC PATTERN
1. Venus is in Pisces and that is a good sign for an artist.

2. Neptune is the oriental planet (the first outer planet rising before the Sun) and that is a good sign for an artist, too.

3. Neptune is square Jupiter, ruler of the 5th equal house and Neptune is in the 5th house. The 5th house is the house of (pro-)creation and performance (plays and games).

4. The Moon is on the edge of Aries, rushing into Taurus*). Maybe that is a sign for an artist as well.

5. The Moon is 15 degrees from Midheaven and 40 degrees (a novile) from Venus.

6. Venus is 112.5 degrees (square and half semi square) from Neptune

So there we are: there is a pattern shaped by minor aspect lines between Moon, Neptune and Venus (in Pisces). This reflects latent artistic talents to be discovered.And there was a person who discovered it. Her mum.

SUCCESSES AND PROGRESSIONS
And that is not all of it, of course. It takes indications for great world wide successes to be the chart of Celine Dion. And helpfull progressions or the right circumstances. This blog is about the artistic pattern only. So I won't go into the relationship with her manager and later husband. But I like to point at the over 17 midpoint combinations for succes in the 22.5 range, such as Jupiter 112.5 Venus/Pluto and sesquisquare Sun/Midheaven. The Sun is sesquisquare Jupiter and 160 degrees (4 times a novile) from Pluto.
(Just one PS: her progressed chart held Jupiter ruler 5 on the Ascendant when her son born.)

*) Read about the Void Moon at the Inauguration on Astropost

**) I like that expression coming from Noel Tyl 'rushing into the next house' and I strongly feel that the final degrees of a sign are reflecting (periods of) change.
Gepost door Astromarkt op 05:06