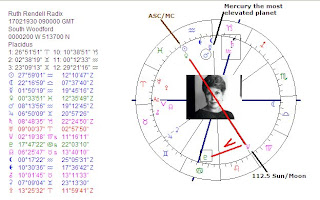 Neptune and Pluto, I said it before on Astropost.blogspot.com, often have a starring role in the charts of authors of detectives. As an example I named Agatha Christie. In her chart, that you can see on Astropost (click the link), Neptune and Pluto are on top. I found another great example: Ruth Rendell.

PLUTO FOR POLITICS (WITH SATURN)
Pluto is (on his own) the symbol of power, influence, money and politics. Ruth Rendell is a member of the House of Lords for the Labour Party. Please see Saturn on the Midheaven for the importance of ambition, status, administration and career making.

MURDER, SHE WROTE...
Now take a good look at her chart and see which planets are prominent. Mars is oriental (= rising before the Sun). Pluto has a crucial spot down under. Saturn is on Midheaven. The combination Mars, Saturn and Pluto is the combination of unnatural death, danger of death and violent death. It is what she writes about.

ARTISTIC PATTERN
The artistic pattern is made by Moon, Venus, Neptune and the signs they rule (Taurus, Libra, Cancer and Pisces), in connection with Midheaven (for the career). We see Venus in Pisces in her chart. We see the Moon in Libra (ruled by Venus). Venus is opposition Neptune. And Neptune is 112.5 degrees from Sun/Moon and opposition Ascendant/Midheaven.

MERCURY, THE MESSENGER
And why is she a writer? Because Mercury is the most elevated planet in this chart.
Gepost door Astromarkt op 04:08