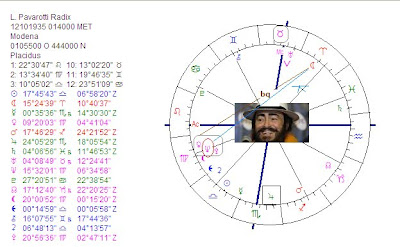 Tenor Luciano Pavarotti has the Moon connected to Venus and Neptune in his chart. Neptune is the planet rising before the Sun. Venus rules the Midheaven and is 67.5 degrees (semi square + half semi square) away from the crucial midpoint ASC/MC. Here you have such a pattern of artistic talent as there are in the charts of the other artists on this blog. Moon, Venus and Neptune and a connection to Midheaven and/or ASC/MC...

Of course there are many persons in the world with an artistic talent. But not many have so many midpoint combinations that indicate success in the natal chart. Just a part of the list:

Sun conjunct Venus/Jupiter
Sun half semi square Jupiter/Pluto
Moon 157.5 Sun/Jupiter
Moon opposition Venus/Jupiter (this is a midpoint Yod pointing at the Moon, for acting)
Jupiter semi square Mars/PLuto
MC opposition Mercury/Jupiter (another midpoint Yod, pointing at Mercury, for the voice)
MC square Jupiter/Uranus for sudden success
MC 157.5 Jupiter/Neptune (for fans and followers)
MC 157.5 Mars/Jupiter (for successful promotion)
and there are more of those. These midpoint combinations offer chances and opportunities whenever there is a transit or a progression.
Gepost door Astromarkt op 13:00