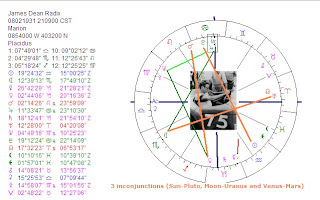 ARTIST OR BEAUTY
James Dean was an actor. Here is the artistic pattern: Venus rules the Ascendant and is trine Neptune and conjunct Sun/Moon. Moon is trine Midheaven in Cancer. Mercury was unaspected to show the importance of communications. It is not a very strong pattern, but that is compensated by the fact that he has Venus in the cool sign Capricorn, just like other famous and handsome guys. Read more about that in my post on Astropost.blogspot.com...http://astropost.blogspot.com/2008/09/male-attraction-venus-saturn-taurus-and.html with Justin Timberlake and Brad Pitt as examples.
DISPROPORTIONAL NEED TO BE LIVING THE RISKY WAY
James Dean had Sun inconjunct Pluto and Moon inconjunct Uranus. He needed tension and sensation (but...had little experience) and he was disproportionally living on the edge. So he crashed. But let us read his chart step by step.
a. Calling Mars (related to ASC/MC)
b. Calling SunJupiter on top
c. Moon ruler 10 in mutual reception with PlutoUranus crucial on the Descendant
There you have all of the ingredients for the adventure of his life.The success (Sun, Mars and Jupiter; Sun Jupiter Pluto) and the accident (Mars Uranus Pluto).
SUN, MOON, URANUS, PLUTO
Notice that the Sun in Aquarius is ruled by Uranus and the Moon in Scorpio by Pluto and that the ruler of Moon is inconjunct Sun and the ruler of Sun is inconjunct Moon. Uranus-Pluto combinations describe being impulsive and having to deal with the consequences. Unexpected dramatic challenges might come your way with this combination. And see how two of the inconjunctions (one of Moon with Uranus, one of Sun with Pluto) complete the picture.

INCONJUNCTIONS
Inconjunctions show the possibility of misbalance and losts. Moon inconjunct Uranus reflects the need for sensation and tension in a disproportional way. Sun inconjunct Pluto reflects the will to live life the intense way, but with no balance. There are even more indications, like Mars related to Uranus/ASC and Uranus/MC. And there is a third inconjunction (Venus ruler 1 inconjunct Mars*). But let us see what astrological conditions there were on the day that he died.
DYING DAY
On September 30, 1955 he died. There were several risky aspects at the same time:
1. Uranus was conjunct natal Mars (the combination of accidents).
2. Uranus was conjunct his progressed Midheaven (a shock).
3. Neptune was conjunct his progressed Ascendant (weakness, neglect).
4. Neptune square his progressed Mars (perhaps he was mistaken or confused).
5. Neptune square natal Mercury (for miscommunications or misunderstanding).
6. Saturn was square natal Sun (for having bad luck).
Those are six hard aspects producing dangerous combinations. Neptune is telling us about the circumstances. Neptune is in aspect with Mars and Ascendant for a fatal (Neptune) injury (Mars-ASC). Uranus with Mars/MC is reflecting the situation or conditions at the time (high speed, going too fast). And Saturn shows what effect there was for his health.
*) Venus inconjunct Mars reflects disproportional passion or losts related to passion. Venus rules the Ascendant (is ruler 1). That is a potential danger, since it says 'Ruler 1 inconjunct Mars' and that means 'misbalance between situations/presentations and anger, agression or 'the concept of what a man is'. Without trying to be a psychologer, I think this might be the key to his 'angry young man' behaviour.
Gepost door Astromarkt op 06:25