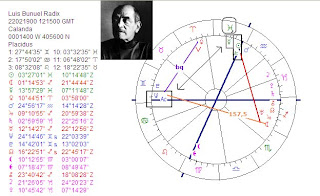 Luis Buñuel was a director. Neptune is on his ascendant, reflecting arts and movies. The Sun was conjunct his Midheaven for directing (and being in the center of it all, performing). The pattern of artistic talents is constructed by Neptune (ruler Midheaven) related to Moon and Venus by minor aspects. The importance of interaction between communications and arts/sensitivity is being reflected by the mutual reception of Mercury and Neptune (they are in each other's sign). Luis Buñuel was born on 22 February 1900 in Calanda at 12:15 GMT with Neptune 157.5 degrees from Sun/Moon for the reigning need to be an artist.
ATHEISM
Central theme in the movies was atheism. Jupiter's tight semi square with the important Neptune is telling us that 'the devoted audience' was an important issue in his life. Jupiter-Neptune is related to stages and religion...His Sun is in Pisces and Moon in Sagittarius, reflecting the combination of the rules of their signs (Neptune and Jupiter) for another indication of the influence of religious convictions.Also, in the equal house system the Sun is placed in the ninth house of convictions. That explains the importance of religion but not the aversion against it.
SUN SQUARE MOON
The Sun is square the Moon and that is (part of) the explanation. The Moon is in the 6th house in Sagittarius. There is a strong need to be critical as well as a spiritual conviction of importance (Sun in Pisces in 9th equal house). And the two of them colide (square). As he became a marxist while he was born in a rich family, this conflict included a conflict with the family.
Gepost door Astromarkt op 02:57