Day of birth of Gavin Friday

For a long time I haven't listened to my CD's. Now that I synchronised my Ipod I rediscovered Gavin Friday and I started looking for the date of birth to see the pattern of artistic talent (for I am sure that he hás it:)! I enjoy the sound of 'Angel' while I am writing this.


First thing that you see watching this chart is: the Sun has no major aspects in sign or orb 5 degrees. That is a 'calling' Sun and that is the signature of performance, being a leader or a star, drawing attention. And the pattern?

Moon is trine Venus and both are sextile Neptune (a small trine).

There is no hour of birth, so there is no information about the Ascendant, angular positions or the midpoints Sun/Moon and AC/MC. And no info about the aspects with Midheaven...But the basic pattern is apparently there. Here is the chart of the day of birth:

It has been a long time. Time for another example of the pattern of artistic talents in a natal chart. All charts here have such a pattern. It is about the complete combination of Moon, Venus, Neptune and Midheaven and additional related signs like Cancer, Libra, Taurus and Pisces. Here is the chart. It is the one of Jorge Luis Borges.

Short report:
Neptune is quintile Moon and sextile Venus.
Venus rules Midheaven and is half semi square Midheaven.
And see how prominent Moon, Venus and Neptune are! Venus rises before the Sun, between Sun and Mercury. Neptune is the first rising outer planet. And the Moon is elevated.
The Moon, Venus and Neptune are connected and related to Midheaven. They are also prominent in the chart.
This is a complete pattern of a professional artist already. The sign Cancer is important because the Ascendant is Cancer. Taurus is important because Midheaven is in Taurus. There is also Mercury quintile Jupiter for creative succes with communications and Venus in aspect with Jupiter/Pluto (for earning a lot of money).
Gepost door Astromarkt op 14:11 1 opmerking:

Beautiful artists and their charts...

It is an art to be beautiful...
See Astropost: Charts of beautiful women and Venus-Saturn-Pluto about the charts of Lindsey Lohan,Britney Spears, Michelle Pfeiffer, Brigitte Bardot, Ingrid Bergman, Catherine Deneuve and Angelina Jolie. They share aspect combinations of Venus, Saturn and Pluto. This combination might just mean that you have to suffer when you want to look good:)...
Gepost door Astromarkt op 02:47 Geen opmerkingen:

The artist in the chart of Phil Collins 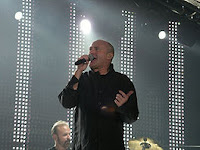 Let us have a look at the B-rated (so: time a bit unsure) ADB-chart for Phil Collins and wonder what in the chart shows his talents and where in the chart the lost of sense in his fingers and hands are (this happened to him starting in 2007).
He has a Sun shining brightly without major aspects with planets or lights (but trine Quaoar, the symbol of shaping new realities). That is for drawing attention
(the prominent Sun is the symbol of the star).
We see Moon trine Venus out of sign and Venus 127 d Neptune and also 127d Uranus. Venus is in opposition with the midpoint of Uranus and Neptune. Venus-Neptune is the combination for high sensitivity and art. Venus-Uranus is the combo for rhythm. Singers and pop musicians often have a Venus-Uranus and/or Venus-Neptune connection in the chart.
I almost forgot to mention that Venus is ' calling'  (no major aspects in sing!) and that the Moon is rising before the Sun, right after Neptune. That makes the artistic trio prominent. When Venus is calling, you can't resist the call for style, entertainment, fun, pleasure and beauty or...being artistic. Also, this B-rated chart has a Midheaven that is connecting Neptune (quintile) and Moon (square) and there is a quatronovile (160d) aspect with Venus.  There is the trio again! So far for the artist in the chart.
In 2007, during the last Genesis tour,  it became clear that there was a medical problem, a dislocated vertebra in the neck. Operations followed. What indications are there in the chart?
I see Progressed Midheaven inconjunct Mars (for loss of muscle/energy or having to give up working). Progressed Ascendant is inconjunct Venus, Progressed Venus square Midheaven, Transit Neptune sextile progressed Mars.  Except for the last mentioned transit the indications are only valid for an AA-rated chart. There is one big indication for a sudden change: progressed Sun is square Uranus.  And if the B-rated chart is correct, this sudden change went along with a difficult inconjunction of Mars. Mars happens to be important for someone who is hitting drums. That is because Mars is the symbol of striking, hitting and using tools.
Gepost door Astromarkt op 07:14 Geen opmerkingen: