Did I say that I posted the last chart of an artist? If I did, I lied because it might be the one that I am posting now!:) I noticed that Adrea Bocelli is coming over to Southern California and that is a good reason to pay attention to his natal chart! 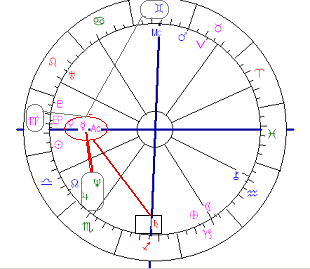 Andrea Bocelli is a very famous singer with a touching voice. He was born September 22, 1958 at 5h15 a.m. in Laiatico (close to Pisa). That is when Mercury was prominent and Mercury is the symbol of the oice. Mercury is important for 4 reasons:

1. For being the final dispositor of Midheaven
2. For being conjunct Ascendant
3. For being strong in own sign Virgo
(4. Because Mercury is rising before the Sun)

Mercury is conjunct Venus (communications with style), Venus is semi sextile Uranus (sense of rhythm) and square Midheaven (that relates the career to entertainment). Mercury is semi square Jupiter/Neptune. That shows that he has a devoted audience! And watch the position of Saturn. Saturn could be read as the ' classical' component, just like it is in the chart of Andre Rieux.also very popular and ' classical' .
Gepost door Astromarkt op 10:21 Geen opmerkingen:

A year ago I started Art&Astrology to show the patterns of artistic talents related to a career in the charts of artist, musicians, painter, photographers, singers and composers...There are about 193 charts on this blog now and I think that that is enough. I am starting a new project in 2010 (read Astropost in January!). If and when any professional in the field of arts or entertainment is in the news, have a look at Astropost.blogspot.com for that is where you will find post about the charts of the celebrities. This blog will remain as an archive (and maybe, from time to time there will be a post about finding the artist in the chart...). Thanks for being here!
Gepost door Astromarkt op 14:04 Geen opmerkingen: