Watch Justin Bieber's chart on Astropost: Neptune and wax figures and see the pattern of artistic talents in his chart.
The pattern of artistic talent is a mix of aspects between Moon, Venus, Neptune and Midheaven and placements in the signs ruled by Moon, Venus and Neptune (Cancer, Taurus, Libra and Pisces). In Justin Bieber's chart we see:
and that is a complete pattern.
Also visit: Astromarkt.net
Gepost door Astromarkt op 00:32 Geen opmerkingen:

On this blog you see many astrogical patterns of artistic talent. These patterns are created by aspects between Moon, Venus and Neptune, the signs that they rule (Cancer, Libra, Taurus and Pisces) and Midheaven (for the professional). Now that Neptune is in Pisces it is time to have a look at the chart of two famous painter with a prominent Neptune in Pisces in the natal chart: Paul Gauguin and Vincent van Gogh.
PAUL GAUGUIN

Above is the chart of Paul Gauguin and here is the artistic pattern in his chart: Moon opposition Neptune in Pisces and both square Venus, ruler of the Taurus Midheaven and elevated. The Moon is semisesquisquare Midheaven and Neptune 75 degrees MC. The midpoint Moon/Venus is in hard aspect with Neptune. And I like to point at the prominent positions of the three players in the artistic pattern: Moon on the Ascendant, Neptune on the Descendant and Venus elevated! This chart is screaming that an artist was born. The chart doesn't speak of long life or steady marriages, however. Gauguin left his wife and children (Moon opposition Neptune and Venus square Neptune are part of the pattern of the artist AND part of the pattern of the divorced man).
Did you know that he lived with Vincent van Gogh for a while? Gauguin's Jupiter was exactly conjunct the Ascendant of Van Gogh and that is a supporting aspect. In the end, the mental state of Van Gogh was too much for Gauguin, however. BTW, Van Gogh also has Neptune in Pisces! Here is his chart:
The Moon (disposing of the Cancer Ascendant) is exactly square the midpoint Venus/Neptune and square Midheaven in Pisces. The Moon is also inconjunct the Ascendant and that describes the unbalanced emotions. It is a different kind of pattern and a completely different chart. The Sun is not making major aspects and that is telling us that Vincent van Gogh knew how to draw attention at any possible level, like a modern 'star'.
I wonder in what way Neptune in Pisces attributed to the style of both Gauguin and Van Gogh. They were contemporary painters and friends for a while, that is what I know.
More about the lives of Paul Gauguin and Vincent van Gogh (external link: http://entertainment.howstuffworks.com/arts/artwork/vincent-van-gogh-biography3.htm)
Earlier post about the chart of Paul Gaugin here
http://art-astrology.blogspot.com/2009/04/astrology-chart-paul-gauguin.html
More about Neptune in Pisces in history, on Astromarkt:
http://www.astromarkt.net/index.php?id=196
Gepost door Astromarkt op 06:56 Geen opmerkingen:

Meat Loaf is news again, see:
http://www.holymoly.com/celebrity-news/video-meatloaf-going-batshit-crazy-gary-busy-celebrity-apprentice54874
That is with the next transits and progressions:

Transit Neptune in the very last minutes of Aquarius, opposition progressed Mars and

With transit Uranus about to be in opposition with his natal Sun and Mars almost in opposition already we might expect to see him in the news again more often in the next few months.
But how about the pattern of talent? It is there, in the natal chart:

Moon in Pisces is calling (emotions at any possible level)
Venus conjunct Neptune in Libra (sensitivity)
Moon square Midheaven is the tightest aspect. He started as an actor!
Venus sextile Midheaven
Neptune sextile Midheaven
There it is again: the combination of Moon, Venus and Neptune with each other and MC and the signs Pisces and Libra.
We all know Meat Loaf! Sun without major aspects in sign or orb 5 degrees means that he is drawing attention at any possible level. Leaders and stars have such a sun! The elevated Jupiter square Midheaven goes for success. (The Sun semi square the orientational Saturn (rising before the Sun and on Descendant) might explain some of the difficulties in his life and career, such as with his father - an alcoholic-).
Gepost door Astromarkt op 13:08 Geen opmerkingen:

Doris Day was very popular. You can see that in her chart for April 3, 1922. The tightest major aspects are:
Sun opposition Jupiter
Sun trine Neptune (almost exact!)
Jupiter sextile Neptune
That is the combination of the devoted audience.  She was worshipped by her fans! But where is the actrice in the chart?
We see that the Moon is in tight aspect with Venus (sextile) and Neptune (semi square) and with Midheaven (conjunction). That is a complete pattern of talent. With Venus inconjunct Ascendant style, sympathy or beauty came her way. The Sun quintile Midheaven made her creative in drawing attention. And Mercury, opposition Ascendant and square Midheaven tells us that communications are of importance. And how about that elevated Moon in Gemini, square Ascendant, keeping her 'forever young' in the eyes of the public?
She was a singer and an actrice but she was also an activist for animal rights. And that is very Sun trine Neptune! See Astropost about Sun trine Neptune, dogs, rescues and Presley, for example.
http://astropost.blogspot.com/2009/02/sun-trine-neptune-dogs-rescues-and.html 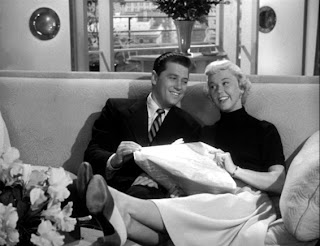