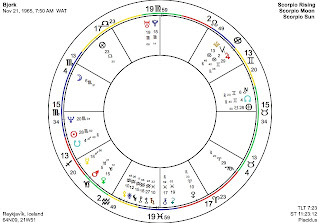 Bjork is a Scorpio, with a Scorpio Moon and a Scorpio Ascendant. Above all, she has Pluto on top of her chart conjunct Midheaven and Pluto rules Scorpio. Pluto is trine Venus in the second house. This makes it important and rather easy to make money. She makes money with singing. Pluto is mirroring the facts of life, money, influence and ‘ being sexy’ .

SONGS
Bjork is a singer and a songwriter. For this we see a T-square with Mercury and a mutual reception of Mercury and Jupiter, disposing of the Midheaven vocational routing. Mercury is reflecting communications (written and spoken or ... singing it) . Also Venus is trine Uranus for sense of rhythm!

SUCCESS
Bjork is not just ‘ an ‘ artist. She is very successful. We can see that from the funnel pattern in her chart, with Pluto leading and with the focus on Jupiter.

TIMES FOR A CHANGE

Here are three years of importance with the progressions of those years:

1. When she was about 11/12 years old her career started. She studied classical piano at the time. Saturn is the symbol of ‘ classics’ . In that year she had progressed Sun square Saturn.
2. She started to be an actor in 1990, with progressed Midheaven square Venus. Venus is the planet of entertainment and style and part of the artistic pattern.
3. She dramatically changed her style in 1994. In 1994 she was almost 30. Her progressed Sun was about to change sign to Capricorn, making one last important aspect in Sagittarius: the opposition with Jupiter (symbol of success). This means that she changed her life style with success. The progressed Midheaven is than sextile Mercury and Mercury is square Uranus and Pluto. The combination of Mercury, Uranus and Pluto is reflecting a changing mind and revolutionary ideas.

Bjork is very special and completely different. Uranus and Pluto on top of her chart are mirroring the complete transformation that took place when she changed her style from a little angel into a woman who beats it!
Gepost door Astromarkt op 15:10 Geen opmerkingen: