Paul and John cooperated with George and Ringo and they were the major stars of the most famous group in the world: The Beatles. Both have an important Sun (symbol of the star) and perhaps that worked as having two captains on a ship.
What John and Paul share is an aspect between Moon and Venus and that is not unusual in the charts of artists as you can see on this blog Art&Astrology. In the composite chart (the combination of the two charts) Moon is trine Venus and semi square Neptune (opposition MC). Together they performed as artists.

The astrological pattern of artistic talents seems to be incomplete for the natal charts with the given data, but that is only at first sight and when you don’t use minor aspects.

His Moon in Aquarius, quite alone in the 10th house and opposition Pluto is maybe enough to demonstrate his influence on the public that was ready for something new.

John’s ‘ calling’ Sun on the Descendant is an indication for the leading role that he should have in the group and perhaps that is the reason why he started his own individual career later. Mars (ruler 1) is the planet of orientation, so that once upon a time in his life he needed to be an activist and ‘ do it on his own’. John Lennon was a Libra, too, so he needed a partner when he did that (and that was Yoko).

Paul’s Quaoar on the Ascendant and square Midheaven and Sun is another symbol of ‘ creating/shaping a new reality’. The astrological pattern of artistic talent consists of:
- the Moon square Venus and
- Moon novile Neptune
- Neptune square Midheaven
With the prominent Sun and Neptune angular in combination with the ‘ calling’ Jupiter and Saturn rising before the Sun you can see the man drawing attention in his field, having a devoted audience and … the man who is first of all ‘ classical’. I was surprised to see that. ..Until I noticed that he made at least 4 classical albums! Saturn is often an important player in the charts of those who play, perform or write classical music.

Fot their teamwork and for the symbols of innovation (shaping new worlds: Quaoar) and turning points (Pholus), see Astropost.blogspot.com for the day of this post with the chart drawings with progressions and transits for the days of the death of the mothers of the famous musicians like you see here. ' She loves you' was one of their early works. It is hard to believe today, that their hair cut (or hair no cut) was a revolution in the world of hair dressers, but it was...

Queen Latifah is a rapper and an actress (also in commercials). That is not all. She has her own perfume line, she is a film producer and she was asked to recite a poem written by Mary Angelou at the memorial service for Michael Jackson. She has already written her autobio in 1999 (with P Sun-Pluto, an appropriate progression for digging up your past) and does kick boxing for fun. The surgery (breast reduction) that she underwent in early 2003 was in a period of changing life style.

Her nickname is very much in line with the positions of Sun and Moon. Latifah means ‘ delicate’ and isn’t Pisces one of the most delicate sun signs? Leo is the ‘ royal’ sign and that is where her Moon is.

The indications for a career in entertainment and styling are:

- Neptune without aspect in sign; a ‘ calling ‘ Neptune refers to fantasy, romance, ideals or beliefs and art at any possible level.
- Neptune is rising before the Sun and Mercury (so Neptune is the first rising outer planet); that is indicating an orientation on the non-material field (art, religion, ideals)
- Neptune conjunct Sun/Moon and semi square Jupiter/Pluto for being motivated by success as an artist (or an idealistic view) – and this somehow, anyhow

NEPTUNE is the most important planet in the chart. Neptune is the planet of orientation, the planet of vocation and the planet of motivation in this chart! Unfortunately, Neptune is also the planet of drugs. Queen Latifah was addicted to drugs in the 90s.
Other observations related to her professional career:

- Venus and Mars in each other’s sign (mutual reception) at the end of the vocational routing (Capricorn MC, Saturn in Taurus, Venus in Aries and Mars in Taurus) for passion
- Moon trine Venus for sense of beauty and style
- Venus/Neptune (midpoint of artistic talents) is conjunct her Leo Moon (desire to show off)

There is no direct connection between Moon, Venus, Neptune and Midheaven, but there is Venus opposition Uranus for sense of rhythm. This Venus-Uranus combination is frequent in the charts of dancers and singers and poets.

There are a number of dramas in her life, like the death of a brother on a motorcycle that she had given him or the carjacking that involved the death of a friend. She was arrested in 1996, with transit Saturn (symbol of restrictions) conjunct the natal Sun. Mars conjunct Saturn and this conjunction inconjunct Uranus mirror possible accidents, incidents, restricted freedom (and the short fuse). Kick boxing (hitting hard) fits with Mars-Saturn, too. With this combination it is always possible to get the short fuse under control. (Einstein has the Mars-Saturn-Uranus combination too and he mentions how he learned to control his temperament.)

PS I like the positions of Chariklo (just before the Sun) and Lilith (square Ascendant) as representatives of the strong woman that she is according to the title of her autobiography: “Ladies First, revelations of a strong woman”.

Two years ago on Astropost I wrote about JERRY LEWIS 82. Jerry Lewis was born on March 16.

Now that Museum Boymans van Beuningen in Rotterdam Netherlands will be exposing paintings of Han van Meegeren, famous for his false ‘ Vermeer’ paintings, it is a good moment to have a look at his chart. 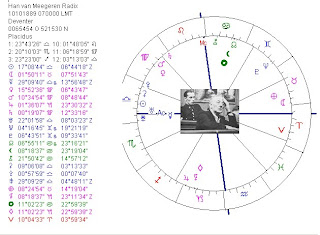 The chart of Han van Meegeren is the chart of a master copier or should we say: someone who was very good at copying another person’s style. Venus, making no major aspects, reflects the talents in the chart. That is pointing at capabilities and talents at any possible level. Venus and Mars (together the combination of passion) are rising before the Sun. He had a passion for a style that was the ridiculised by his critics. He took revenge by fooling them with a ' Vermeer' . That is how the fraud started. But he had talent...

This painting was famous, too, It was a Van Meegeren and almost every house in Holland use to have a copy of it on the wall, in the fifties of the past century. He was very popular (Moon trine Jupiter), in spite of the fraud.

Mercury in Libra is semi square Venus and biquintile Neptune and Pluto. That illustrates communication talents and a creative way to be discrete. He knew how to sell things and he knew how to lie. For years he lived in luxury, selling ‘ discovered’ paintings of Vermeer (for millions). His art was as good as Vermeer’s art was, but his name was different. He had to pay for the fraud and spent some time in jail (Sun afflicted by Saturn and Uranus, the combination of restricted freedom).

The chart of HAN VAN MEEGEREN has the same sort of combinations as most artist’s charts have. With Sun in Libra, Moon in Taurus and the Libra Ascendant the signs of beauty, entertainment and style were occupied. Moon was sesquisquare Venus; and Venus was semi square Midheaven. Neptune is sextile Midheaven. The pattern of artistic talents is there, but there is no direct connection between Venus and Neptune. The midpoint Venus/Neptune is in hard aspect with the Ascendant.
And watch the 2 biquintiles with Mercury (for creative thinking).
Gepost door Astromarkt op 11:54 Geen opmerkingen:

Thanks to Astrotheme here are the charts of the main characters in the movie Sherlock Holmes: Robert Downey jr. and Jude Law.

Robert Downey jr. is Sherlock Holmes in the movie. With Neptune opposition Moon in Taurus (on top) and in a creative biquintile with Venus, ruler of Midheaven, his chart holds the complete pattern of artistic talent that you see in all of the charts on this blog. And Venus trine AC makes him very charming, too:) Most attractive man have a strong Capricorn, Virgo or Saturn in their chart and so has he.

Jude Law (Dr. Watson in the movie) has Midheaven sextile Venus conjunct Neptune. The conjunction of Venus and Neptune is semi square Moon. Venus is conjunct the Ascendant for beauty. He is a Capricorn with Saturn opposition Ascendant. Venus (ruler of the Midheaven in Libra) and Neptune are on either side of the Ascendant.

The astrological pattern of artistic talent is a combination of aspects between Moon, Venus, Neptune and the Midheaven, with most often the signs that they rule (Cancer, Taurus, Libra and Pisces) related to it. For more about male attraction, see Astropost...

The artist in the chart of Carla Bruni

Art & Astrology is about the artist in her chart. The artistic talents of Carla Bruni are as obvious as her charms are☺ She is a singer and she is the First Lady of France.

And for the beautiful presentation: Venus exactly trine the Ascendant in the very feminine sign Cancer.