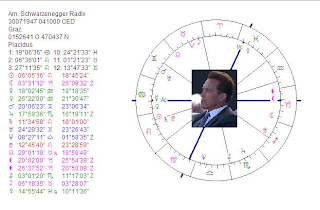 Arnold Schwarzenegger was born on July 30, 1947 in Graz (Austria) and is now the Governor of California. Who would have imagined that in the time that he was a body builder and actor? There is a clue in his chart. The midpoint Sun/Moon is making aspects with Mercury, Saturn and Pluto and the combination of Mercury, Saturn and Pluto is reflecting the strategic mind that (apparently) is needed for politicians as most of them have such a combination in their chart. But where is the pattern of talent needed to be an actor? It is in...

1. Midheaven in Pisces, square Mars (muscles)
2. Venus in Cancer (ruled by Moon)
3. Neptune sesquisquare AC/MC (and Pallas 67.5 degrees from AC/MC)
4. Venus doesn't make major aspects and that means that Venus is 'calling' (Venus symbolizes style, beauty and diplomacy: esthetics!)
5. Venus is quintile Neptune for creative artistic talents
6. The Moon is in a (wider) square with Neptune
7. Venus is trine Midheaven for a career related to esthetics
8. Neptune is quindecile Midheaven (a strong focus on the amorphous world of cinema, for example)
9. The Sun is the final dispositor of Midheaven so that this Leo can draw attention as a star AND as a leader
10. Sun sextile Neptune for a vivid imagination
Mercury conjunct Ascendant shows the crucial importance of communications and language (maybe even his accent:)!

Arnold Schwarzenegger's popularity in his home land Austria vanished when they found out that he is strongly in favor of the death penalty. Where does thát preference come from?
Look at Saturn conjunct Pluto with the midpoint half semi square from ASC/MC, for example. Mars is semi square Sun and septile Saturn-Pluto. He is really the kind of person who is inspired by doing it the 'die hard way', just like in the movies. And maybe that is what makes him controversial (Uranus square Midheaven).

With Sun conjunct Venus in the progressed chart his star was rising (Conan the Barbarian) in the world of entertainment. As from 1984 (when in the progressed chart Saturn and Pluto were conjunct Ascendant) he presented himself as an active Republican, but he had been a Republican since 1968, when he entered the USA and heard Mr.Nixon*) speak, a President with Mars inconjunct Saturn and opposition Pluto, so with the same 'die hard' combination in the chart as Schwarzenegger. And what he said appealed to him...
Gepost door Astromarkt op 10:13