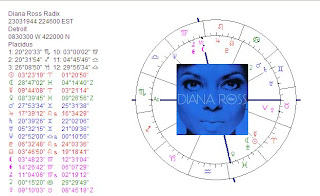 The natal chart of Diana Ross has the Moon in Pisces rising before the Sun. The Moon is sesquisquare Jupiter/Pluto and half semi square Venus/Uranus. This alone tells us that there is a need to escape real life issues and to dwell in the house of romance, dreams, fantasy and arts. Her friend Michael Jackson, Elvis Presley and many other artists have the Moon in the visionary and sensitive sign of Pisces*).
The chart also reveals that she is very successful. Her sense of rhythm helps her on the way. There is of course more in the chart of such a famous singer, like Venus half semi square Sun/Moon (for entertainment as the motivating factor). venus is opposition Jupiter/Neptune (for success in entertainment and for the fans!). Mercury's positon opposition ASC/MC tells us about the pen or the mouth as a crucial factor. Jupiter is sesquisquare Sun/Moon (for expansion, travelling, success) and we also see the manager/businesswoman in the 112.5 degree aspect of Saturn with ASC/MC. If this is not enough to convince the astrologer of the fact that this is a very successful artist, there are also Neptune opposition Sun/Moon and 112.5 degrees from Sun/Jupiter, Pluto sesquisemisquare Venus/Jupiter and the very important half semi square of Midheaven with Jupiter/Pluto. In fact, the successful artist is being described in more than one way. For example, have a look at the most important placements (the Astro ID) of the chart: Jupiter is on top of the chart, Venus in Pisces is close to the IC and Moon in Pisces oriental. Moon, Venus and Jupiter together...That is the combination of sense of art, style and entertainment or feeling for what the public needs with the symbol of success.

Or just look at the aspects. There is sesquisquare between Sun and Jupiter. The Sun is also opposition Neptune, tightly. The Sun, Jupiter,Neptune combination is the combination of fans and followers (an audience). As there is also a trine between Sun-Mercury and Pluto this combination is intensified. She has a strong voice (Mercury-Pluto).

Diana Ross is 3 times a successful singing lady. On October 16, 2009 there will be a performance in Arnhem (Netherlands) for 30.000 people in the Symphonica in Rosso (with Marco Borsato).

Venus square Uranus is one of the aspects in the charts of divorced women, too...

*)When two people have the Moon in the same sign, they often are 'soulmates'.
Gepost door Astromarkt op 08:27