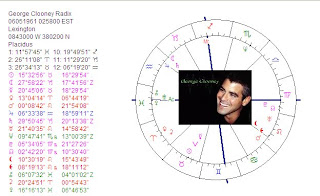 George Clooney was born on May 6, 1961 at 2h58 a.m. in Lexington. On that moment in time and on that place the Sun did not make major aspects, neither did Venus or Mars. That is the recipe for a man who will draw attention anyhow. And for a man with a passion! Jupiter was square Neptune and inconjunct Pluto on that day. That is reflecting success in the movies and a lot of fans, but...it would not come easy, it had his price.

VENUS
With Venus half semi square Sun/Moon and rising before the Sun he is motivated by (and orientated on) beauty, style and entertainment from the start. Venus is 75 degrees from the Moon and 112.5 degrees (square + half semi square) from the midpoint Moon/Neptune. That is reflecting sense of style and beauty in combination with sensitivity and empathy.

George Clooney moved to Hollywood in 1982 with Progressed Sun square Pluto. That aspect is indicating a moment of dramatic change. As Pluto is in his sixth house, his daily life style changed. He didn't become a success all at once. But in 2000 he was elected Best Actor in a comedy. That year his retrograding progressed Jupiter was conjunct natal Jupiter again, a progressed Jupiter return that showed to be very fortunate. A nasty period in his life was the end of 2004. That is when he had Moon inconjunct Moon and Saturn (in the natal chart there is a conjunction of Moon and Saturn) and Midheaven opposition Mars and conjunct Saturn. 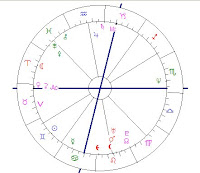 For more about Clooney, see Astropost...

Or click here to see the post about Johnny Depp and other beautiful and sexy men. I bet that the position of Juno (symbol of marriage) on his Ascendant is part of his attraction.

You can see Clooney singing in 'Brother where art thou' on YouTube... (Great song, BTW:)
Gepost door Astromarkt op 10:01