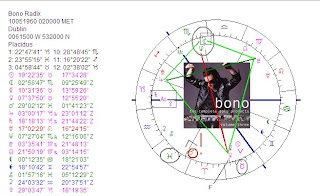 Bono, the lead singer of U2, was born May 10, 1960 in Dublin with a 'cool' Capricorn Ascendant conjunct Saturn. He is rather small (less then 1.70 m) but he is also great. How does that show in the chart?

1.
The pattern of artistic talent in this chart is made by Venus in Taurus, the final dispositor of Midheaven, opposition the elevated conjunction of Moon and Neptune. Also there is a prominent Pallas on the Ascendant (not uncommon in the charts of artists).

3.
There are no placements in air signs and that refers to communicating at any level. (BTW Mars is 'calling', conjunct Aries Point and in the romantic and artistic sign of Pisces in the third house of communications. Mars is rising before the Sun. Bono is in the first place an activist, full of energy. And he uses his profession to be that activist. Every show contains a message. In Amsterdam he referred to Iran, for example. Bono is has influence.)

4.
Mercury and Juno are in hard aspect with Sun/Moon and ASC/MC (and Sun/Moon in aspect with ASC/MC). Motivation is of crucial importance. And Bono is motivated to communicate (sing, speak or write) and to be attractive (Juno).

On this blog Art & Astrology I show you the patterns of the artists and other strong indications for fame and talent. Bono also has a very strong will and he is a realist. He has 60% of the positions in his chart in earth signs and 60% in fixed signs. Taurus is a fixed earth sign. Sun, Mercury and Venus are in Taurus. Taurus (and Venus, ruler of Taurus) is part of the kite figure in the chart. In other words: there is a very strong pattern in the chart of Bono!