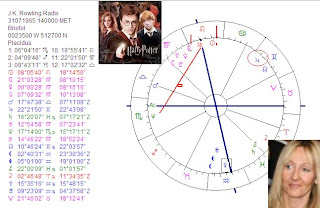 There is no writer in the world who achieved what J.K. Rowling did. She is a million seller! For all those who want to follow into her footsteps: here is her natal chart. Let us see what it takes to become as famous as she is.

SUN, JUPITER, MERCURY and PLUTO
The Sun is the most elevated object in the chart (square Ascendant).The Sun doesn't make major aspects in sign. That signifies that she will draw attention at any possible level.

Jupiter is rising before the Sun, for a positive attitude, success, travelling (the international; she was married to a Portugese man in the 90's).

Jupiter is also sesqui semi square Sun/Moon and semi square Sun, square the Moon and sextile Midheaven. The combination of Sun, Moon and Jupiter comes back 3 times (Sun/Moon 67.5 Jupiter, Sun/Jupiter 67.5 Moon and Moon/Jupiter conjunct Sun. This combination promises success because the nativity is motivated by optimism, growth and development.
Mercury, the planet of communications, is 'calling'. Mercury is conjunct the midpoint Sun/Moon. That makes her in heart and soul a writer (someone with a message).

Sun, Mercury and Jupiter are prominent in her chart and they are connected by hard aspects. The Sun is half semi square Mercury and semi square Jupiter. The Sun is also semi septile Pluto. This combination of Sun, Mercury, Jupiter and Pluto is a combination for many many words and great success in communicating.JUPITER, NEPTUNE and MIDHEAVEN
Mars, Jupiter and Neptune are in aspect with Midheaven. Neptune is square MC. That strongly relates fantasy, empathy and vision to the career. Many astrologers say that Neptune-MC aspect reflects a negative attitude to the profession (and gives a tendency to run away from the usual job).Perhaps, but it is also a strong indication for artistic talents. Jupiter and Neptune together, related to Midheaven, show 'the believing audience', the fans and the followers. Mars-Jupiter makes highly productive. Mars-Neptune however points at wasted energy (or: energy used for a fantasy:).

The Moon is tightly square Jupiter; that is for growing popularity and being used to successes.

In June 1997 the first Harry Potter was printed. Transit Uranus was opposition Sun at the time and Jupiter trine Jupiter. Later that year her progressed Midheaven was square Jupiter (the planet of editors and success). That is when she became famous. The first time that she thought of writing about Harry Potter was in 1990, with MC conjunct Pluto. From 1990 to 1997 she lived between Pluto and Jupiter, the combination of great success, but she was not aware of it. In December of 1994 she returned, divorced and depressed, from Portugal to Edinburgh and that was exactly in the middle of the period from the start of her 'vision' till the moment that the book appeared. (There were thorns on the rose bed: J.K. Rowling had a bad time after her divorce. Mars inconjunct Saturn is the reflection of that. The Mars-Saturn combination is the combination of energy ending, of death and of a blockade.) Even that dark period was a period of inspiration. She 'invented' the Dementors...

CHILDREN's BOOK, WHY?
Why is she writing a book for children? I think that it is because of the fantasy. Her works (MC) have an aspect of fiction (Neptune). Neptune happens to be the ruler of the 5th house of games, play, entertainment and ...children. You can read this combination of Neptune ruler 5 square Midheaven as follows: work related to children's fantasy...

ARTISTIC/CREATIVE PATTERN
She has Venus quintile Neptune (70d04m), Neptune square Midheaven and sextile Moon. Notice the position of Pallas on the IC. Pallas is often angular in the charts of talented people.

EDUCATION
Jo Rowling has a BA in French and Classics.

CONCLUSION
She was talented and telling stories from the start had a good education and was strongly driven and never stopped trying to get her book in the shelves. A Scorpio Ascendant for pushing. She has a very positive attitude (Jupiter oriental in aspect with Sun/Moon; you may notice that her chart is strongly reflecting the positive personality of Harry Potter).. She is a communicator in heart and soul at any possible level and she drew attention (in a positive way)....It will be difficult to copy all thát...
Gepost door Astromarkt op 11:08