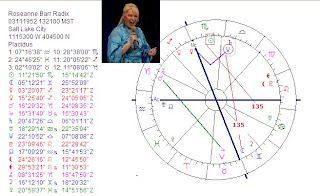 Roseanne Barr is an actor, a writer and a comedienne (a stand up comedian). Last night I saw a dated show that ended with her dancing like Madonna in a sort of a ballet suit, never minding her weight, to show that there is no need to be afraid:)

Weight
Roseanne Barr has been overweight all her life. In the early 80s she became famous with an overweight stand-up comedy routine. Her overweight is part of her identity. Jupiter in Taurus is inconjunct Venus in Sagittarius. Both signs like what is nice and ask for more. The inconjunctions shows that there is little balance when it comes to a party and an extreme love for 'a lot' of candy. Jupiter in Taurus (the one that makes you bigger and/or great) is also sesquisquare the crucial midpoint AC/MC, promissing success and growth (in whatever direction).

More about obese and astrology on this blog in the post 'Why we are fat and what part of the chart can we blame for it'...

Artistic pattern
Roseanne Barr has the Moon sesquisquare Neptune. Venus is 112.5 degrees from Sun/Moon. Neptune is semi quintile Midheaven. Moon is opposition Venus/Midheaven and Neptune is semi square Venus/Midheaven.
The fact that minor aspects and midpoints are relating Moon, Venus and Neptune might mean that there is talent behind the woman on stage (preparations for example).

The elevated unaspected Sun shows 'show' (to be above all in the center of attention somehow, anyhow). I think that it is that this is very important, seen in the light of her career.
There are more indications for a career in the world of entertainment, like the position of the Midheaven conjunct Sun/Venus and 112.5 degrees from Jupiter/Neptune (for the fans and the audience).

Meanings
This shows that she is first of all an idealist or an artist with talents and a great drive, who is likely to draw attention at any possible level, anyhow. The aspect between Sun and Uranus reflects that she is (often) a controversial person, different than others, special, causing upheavel. She mentioned that she was an outsider always. (Also notice Mercury sesquisquare Uranus for controversial opinions - and changing your mind, btw -).

Marriages
Uranus affliction with the Sun is one of the aspects that shows a risk for divorce (or being a bachelor) in the chart of a woman. Another sign is an affliction between the first and seventh house. Her Uranus rules the first house and the Sun is dispositor of the seventh house of marriages. Add this with Venus and the Moon in the double bodied signs Sagittarius and Gemini and with Pluto in the seventh house (turning relationships into challenges) conjunct Sun/Moon and there is the picture of a three times divorced celebrity who is now living on her own.

Adoption
I read that she had a child in 1971 and that she arranged an adoption. In 1971 she had progressed Midheaven opposition Ceres (symbol of motherhood). In the progressed chart Mercury (natal ruler of the 5th house of procreation and of the 4th progressed house of family) was conjunct Midheaven. There were signs of changing times:
- the progressed Sun was changing sign to Sagittarius.
- in the solar return chart for her birthday in 1970 in Denver, Uranus is opposition Midheaven

Midheaven 'calling'
There are no aspects of Midheaven within 5 degrees orb or within sign, so Midheaven is 'calling'. That means that her career, status and position can reach any level (up or down) and will strongly be influenced by others or by opportunities symbolized by transits and progressions. The Midheaven receives one minor aspect: a semi quintile from Neptune, the symbol of the artist.
(Perhaps the unaspected Midheaven has a role in the syndrome of DID, because the identity is fluctuating?).

DID and Michael Jackson
Recently Roseanne Barr wrote a public letter to Michael Jackson's children in July 2009. She said MJ asked her to call him the day before he died and she didn't call him back soon enough. She mentioned DID (dissociative identity disorder - more than 1 personality: notice the Moon in a double bodied sign, afflicted by Saturn and Neptune) as a result of her youth. Here is the link to Examiner.com...

One thing for sure: she cannot sing the national anthem. See YouTube...
See her on stage on YouTube and watch the comments: they love her or they dislike her!
Gepost door Astromarkt op 02:40