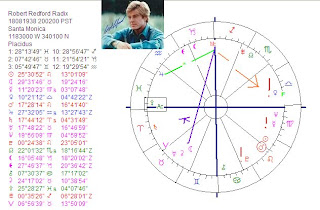 Robert Redford married his long time friend Sibylle Szaggars this week. She is an artist, so is he. Let us have a look at the chart of Robert Redford and find the artist in the chart.

Robert Redford was born 18th August 1938 at 20h02 in Santa Monica, according to my files (source: Astrolab). Here is the pattern of artistic talent in the chart for that time and place:

3. Venus is 'calling' (not making major aspects in sign or orb 5 degrees)

4. Venus final dispositor of the MC-routing

This chart is reflecting the birth of a person who has style, charm and diplomacy or beauty at any possible level and who is motivated by his fans and the successes in art. The chart has a keen pattern for an artist. when there are more prominent placements and with a double bodied sign like Sagittarius on Midheaven, it is to be expected that there would not be ONE career, however. Wikipedia mentions that he is: an American film director, actor, producer, businessman, model, environmentalist, philanthropist. I see that he was a pitcher once and I notice that Mars is the first outer planet rising before his Sun (for the military, sports, energy or activism first).
Jupiter is sextile Midheaven for the interest in directing (guiding).
Mercury and Pluto are also 'calling' so that communications and politics are important as well.
And I already mentioned the oriental Mars for activism.

The tightest aspect in his chart is Mars square Uranus. This is reflecting a hot temper and a drive to make a change (at once please). This aspect is one of the indications for divorce in the chart of a male. For more about Mars-Uranus, see Astromarkt (link...)

Watch Robert Redford in the trailer of Butch Cassidy and the Sundance Kid on YouTube
http://www.youtube.com/watch?v=aXCC53ndwac
Gepost door Astromarkt op 02:55