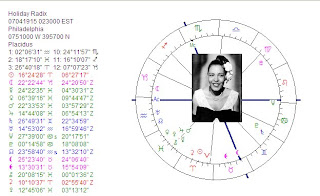 Billie Holiday was born on April 7, 1915 in Philadelphia PA at 2h30 a.m. EST and died 50 years ago, on July 17, 1959 in New York. Mercury (the voice) is trine her Midheaven (career). Another indication for being a singer is the half semi square between Venus in Pisces and Uranus. I have seen many examples of Venus in aspect with Uranus or Neptune or in the signs that they rule in the charts of singers.

Venus is in Pisces (offering a potential for artistic talent and sensitivity)
Venus is 'calling' (no major aspects in sign or orb 5 degrees) (charm and entertainment at any possible level)
Moon semi square Venus (sense of style and beauty)
Venus sesqui semi square AC/MC (crucial importance of beauty, charm and talents)
Moon half semi square AC/MC, too (sense of style is of crucial importance)
Neptune (ruler of Venus) trine MC and angular (on Descendant) links the career to arts and artistic talents as a corner stone of the personality

Also notice that Pluto (ruler of MC) is in the 5th house of entertainment and show. Pluto doesn't make major aspects in sign or orb 5 degrees. This 'calling' Pluto tells us that there would be a strong ambition for being part of the world of entertainment at any possible level.

Mercury, Neptune and Midheaven form a grand trine. It is still a mystery whether or not her autobiography 'Lady sings the blues' was fake or real. I don't know it that includes her hour of birth...She tells the story of a woman who was beaten up and abused by men. Perhaps the Mars square Saturn influence? It is one of the indications for a divorce*), separation or for keeping distance when it is about males...

BTW: Neptune on the horizon is also a symbol of a fake name, an alias. Billie Holiday's real name was Eleanora Fagan Gough. Unfortunately Neptune is also the symbol of drugs. Drugs killed Billie Holiday too soon, age 45, with the progressed Sun at 29d26m Taurus, about to change sign. When the progressed Sun changes sign your life style is transforming. And sometimes this critical phase stops not only the way you live but life itself.

You can hear Billy Holiday singing 'How deep is the ocean' and see pictures on YouTube...

*) Signs for divorce (or not marrying at all when there are too much of them) are:

In a man's chart:
Hard aspects between Moon and Saturn or Neptune, Venus and Neptune, Mars and Uranus.

In a female's chart they are:
Hard aspects between Sun and Mars or Uranus, Venus and Uranus, Mars and Saturn.

And in the charts of both genders:
Afflictions between the 1st and 7th house (rulers)

I found that Venus in Aries or Mars in Libra do not make relationships easy. Neither does the placement of Neptune on the horizon in the charts of females. Hard aspects between Moon, Venus and/or Mars illustrate that it may be hard to find a match (and so the nativity needs to compromise).
Gepost door Astromarkt op 04:51