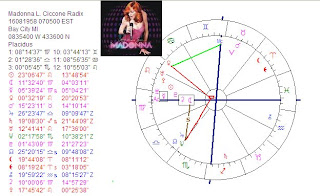 Madonna L. Ciccone was born on August 16, 1958 at 7:05 a.m. in Bay City (83d54W 43d36N). Female symbols are prominently placed in her chart (The Moon and Ceres are angular -on the Ascendant - and Pallas rises before the Sun; Juno is conjunct Sun/Moon). It is clear that the female touch is important in her chart and that is logical in the chart of a female icon in the world of entertainment. From the aspects with Midheaven you can see that she would be a femme fatale (Venus and Pluto in aspect with MC) with great success (Jupiter biquintile, too). The combination of Venus, Jupiter and Pluto with Midheaven doesn't only promiss a lot of money (Venus-Pluto for money, Jupiter for a lot), but also reflects the chance of being a great (Jupiter+Pluto) artist (Venus).

1. Venus square Neptune for sensitivity and artistic talent
2. Moon septile Neptune for inspiration through fantasy and sense of 'what the people need'
3. Neptune inconjunct Midheaven relates art to the career
4. Venus sextile Midheaven for entertainment and joy

It is not much, I am afraid. I could add Saturn, ruler of the 5th house of entertainment, pleasure and show, because Saturn makes a obsessive and focused quindecile with Midheaven for a strong focus on the the business (Saturn) of entertainment (5th house) as a career (MC). Notice that Venus is semi sextile Pluto and that both are relegated to Midheaven. Earning money is one of the goals. With Gemini on Midheaven and Mercury in Virgo (final dispositor) on the Ascendant communicating (using the voice) was likely to be part of the job.

Madonna is perhaps another kind of artist. Her Sun/Moon with Mercury, Mars and Uranus perhaps show us that she is motivated more by making a change and producing shocks by means of communications (singing and speaking).

URANUS AND PLUTO: FOR ANOTHER LOOK AND CONTROVERSY
In 1986 she 'transformed' into a blond girl. That was the year that her Virgo Ascendant became a Libra in progression. Then in 1989 she changed her looks again. The period of changing signs in progression is a period of transformation. It will last from the 29th till the 2nd degree until it is completely over. Also, with the Moon on the Ascendant like Madonna has, a person likes to change the way she looks. And there is another reason: Uranus is the first outer planet rising before her Sun. she wants to be different.

CONTROVERSY
With Uranus oriental and square Mars we expect her to be rebellious, impulsive and controversial and to have a short temper (and a special drive and energy!). Mercury, Mars and Uranus are in hard aspect with ASC/MC (in the 22.5 degree range), reflecting controversial discussions. Madonna is known for swearing, for example. And her shows always seem to shock someone. Uranus is half semi square (22.5 degrees) from Sun/Moon, so that she is probably motivated to shock, change and 'renew' the world.

With Pluto conjunct Sun/Moon there is a combination of Uranus, Pluto and Sun/Moon. Sudden changes, moves and incidents are to be expected when you are strongly motivated by surprises, excitement, transformations and challenges.

Astrology students may not be surprised that she had progressed Midheaven trine Jupiter and progressed Jupiter square Venus in 1983, the year of her best seller album 'Madonna'. In the natal chart Jupiter in the second house is biquintile MC (for a creative way to get a better financial position). This aspect was activated in 1983.

CHILDREN
There is some correspondence with the chart of Angelina Jolie that shows what in their chart is related to foster parenthood. You can read more about that on Astropost.blogspot.com.

You can see Madonna on stage here...Lately Madonna seems to appear rather skinny. Saturn, the symbol of bones, is in her first house of appearances right now.