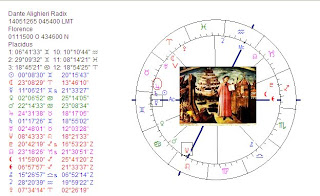 Neptune had not been discovered yet, at the time that Dante Alighieri was born, so there is little chance that his chart is corrected to fit the 'frame' of an artistic author. Neptune has a crucial spot in his chart (opposition Midheaven), while Mercury is conjunct Ascendant (another important spot in a chart). Mercury and Neptune together symbolize 'telling tales' as they combine the symbol of communications and the symbol of fantasies.
The artistic pattern is completed by the aspect of the Moon 105 degrees from Neptune (a minor aspect) and by the semi quintile between Venus and Neptune.
MERCURY, JUPITER, NEPTUNE
Mercury and Neptune are corner stones of this chart and Jupiter is prominent because he is rising before the Sun. Notice that Jupiter is related to the midpoint ASC/MC and to Mercury/Neptune, so that international success was integrated in the concept of telling tales.
Neptune is 67.5 degrees from Mercury/Jupiter, Jupiter is 45 degrees from Mercury/Neptune and Mercury 22.5 degrees from Jupiter/Neptune. This midpoint combination of Mercury, Jupiter and Neptune tells us 3 times that he was communicating with a devoted audience, that he was successful in telling tales and that he was a great communicator of visions or fantasies.
BAN
Dante Alighieri wrote La Divina Comedia (the holy comedy) that is still read all over the world. His grave is in Ravenna, as his home town Florence banned him in 1302. In that year transit Neptune was inconjunct his natal Sun (ruler of IC, symbol of backgrounds and home). The inconjunction is a symbol of lost. He never returned. In the natal chart the distance between Sun and Neptune is within orb of the minor aspect of 67.5 degrees (45+22.5), That explains the impact of the transit. In a way he was forced to become the traveller who is indicated in the natal chart by the position of Jupiter, rising before the Sun...
For more about the inconjunction, see Astropost.
For more about the charts of authors, click the label 'writer' below.
Gepost door Astromarkt op 02:04