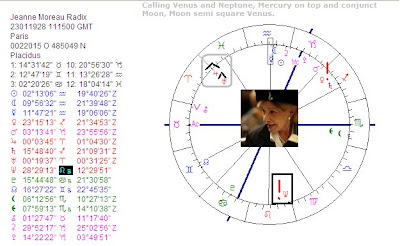 Actress Jeanne Moreau has some interesting placements in her natal chart. She has Moon conjunct Mercury on top, reflecting the need to communicate above all. This conjunction shows curiosity and 'keeping memories alive' (Moon) together with (conjunction) communicating (Mercury). The Moon is also semi square Venus for sense of style and beauty.

Jeanne Moreau has the pattern of artistic talents in her chart and this pattern is constructed by the importance of Venus and Neptune, by the Moon on top conjunct Mercury and by Neptune biquintile MC and (wide) trine Venus with Venus semi square Moon.
Gepost door Astromarkt op 07:34