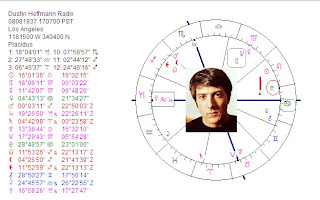 On this blog Art&Astrology I show the astrological pattern of artistic talents in the charts of artists. This pattern relates Moon, Venus, Neptune and Midheaven and often one of those are in the signs ruled by Moon, Venus and Neptune. These signs are Taurus, Cancer, Libra and Pisces. In the chart of Dustin Hoffman, Venus is in Cancer. The pattern is as follows:

Mercury, dispositor of 'Lettres' and symbol of the messenger (using the voice or the pen) rules the fifth house of games, plays and (pro-)creativity and is final dispositor of the Midheaven. The Moon and Neptune are trine Jupiter (sensitivity harmoniously linked to success and popularity going together with art; having a lot of fans).

I also like to point at the position of Pallas, on the Ascendant. Pallas, symbol of patterns, is often angular in the charts of artists.