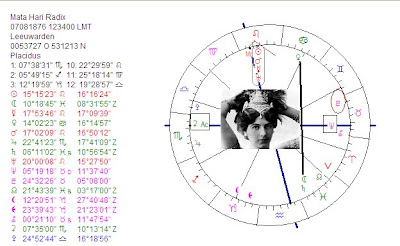 Was Mata Hari a dangerous spy? We will only know in 2017, when the files are openend. But we are sure that she could dance and act. And that talent is shown in her natal chart, like this:
- Moon in the artistic sign Pisces
- Venus in the sign of the actor, Cancer
- Venus semi sqaure Sun/Moon (for charm and talent in heart and sould)
- Neptune on an angle (for prominent empathy)
- Neptune half semi square Sun/Moon (together with Venus semi square: the artist in heart and soul)

Pluto rises before the Sun. Together with Neptune Pluto shapes the Astro I.D. The planets are important (ruling Moon and Ascendant) and another indication for the 'silent force' (the issue of discretion, secrets and mysteries) is the fact that the Sun is square Neptune/Pluto. In those days (the first World War) oriental dances and vales were seen as highly mysterious...and suspicious. Mata Hari died as a spy. You can read more about that on Astropost.
Gepost door Astromarkt op 03:34