Grace Kelly (Princess Gracia of Monaco since her marriage) lived from November 12 1929 (Philadelphia 5:31 a.m.) untill a stroke combined with a car accident killed her on the 15th September of 1982 at age 52. This article focusses on the potential for being an actor in her natal chart.

Her astrological i.d. has a few special marks: Uranus does not make major aspects in sign or orb 5 degrees (I name that a 'calling' Uranus) and a calling Neptune rises before the Sun (the oriental planet, see 'Vocations' by Noel Tyl). Her birth chart shows that she was an actress by the oriental Neptune, unaspected (calling!) and by the placement of Moon in Pisces in the 5th house of children, amusement and games. Jupiter is calling, too. The combination of Jupiter and Neptune is the combination for a person who is on stage, with an audience or public that uses imagination. The combination is frequent in the charts of actors and it is frequent in the chars of popes.

Pluto is the end dispositor of the royal Leo MC and that points at the prominence of politics, power, sexuality, influence AND her death in her life.

The chart of Grace Kelly is below. (source data: Astrolab). 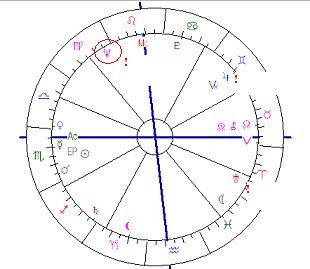