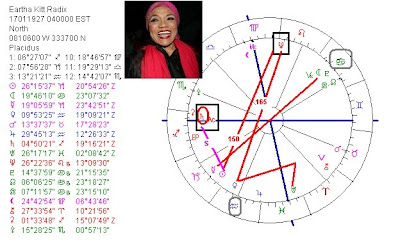 Eartha Kitt died yesterday. She was an American singer, who left the States after she offended Lady Bird Johnson and was not invited on stage anymore. That was in or around 1968, when she had progressed Sun square Saturn (for making a mistake) and later conjunct Jupiter (for the international...). In her natal chart Saturn is important. This planet is on the Ascendant, rising before the Sun and making a septile aspect with the Sun, so that any mistake would have a lot of impact.

The singer in her chart is reflected by the position of Venus in Aquarius (for sense of rhythm, confirmed by the semi square of Venus with Uranus). Venus is quindecile Neptune, the most elevated planet in her chart. One of the meanings of Neptune is 'the artist' (fantasy, empathy and vision). This combination means that she is above all an artistic talented person with sense of rhythm.

The Moon is strong in Cancer and there is a distance of 160 degrees between Moon and Venus. In the ninth harmonic her Moon is conjunct her Venus. Venus is related to the Moon and Neptune, by minor aspects and Neptune is on top of her chart. That shows the artistic pattern, like in all of the charts of artists on this blog.
Gepost door Astromarkt op 01:56