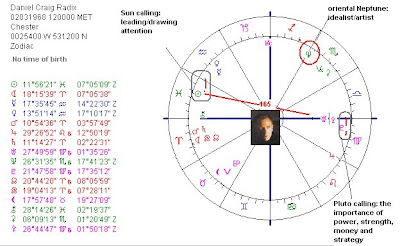 Daniel Craig was born March 2, 1968 in Chester U.K. Right now Pluto is trine his Jupiter and that shows a success. Quantum of Solace broke all records. Daniel Craig is James Bond.

It often happens that actors have the profile of their role in their charts. So it is with the actors who did James Bond. And so it is with Daniel Craig. His chart is the chart of strong and impressive person. How does his chart show that he is the perfect Bond? First of all he is an actor (Neptune, symbol of the immaterial world, is oriental in his chart).

1. He has Mars conjunct Saturn in Aries for the real tough guy.
2. Sun and Pluto are 'calling' (not making major aspects in sign or orb 5 degrees), so that his strength and courage draw attention.
3. The combination of Neptune and Pluto is the combination of the silent force…perfect for a spy.

THE BOND PROFILE
All actors who ever were Bond have the signature of the strong man in their natal charts. They are cold blooded, cool, energetic and strong. Pluto is important in their charts and so are combinations of Mars, Saturn and Pluto and position in the signs of Aries and Capricorn.

Daniel Craig makes no difference. He is the perfect Bond, even though he is a different kind of Bond.

DIFFERENT KIND OF GUY
Remember when it became known that he should be the next James Bond? Protests all over the world, because he was not the prototype (blond, different shape of the body, not the 'beautiful man'). At that time (2005/2006) he had transit Uranus conjunct his natal Sun. Uranus is the symbol of controversy. The conjunction appeared also in his solar return chart for 2006 and activated an existing quindecile between Sun and Uranus in his natal chart. This quindecile signifies that 'begin slightly different from the rest' might be his life theme. BTW: Uranus disposes of his Venus in Aquarius so Uranus rules the planet of beauty and charm. He is indeed different, but in my eyes: the most convincing James Bond ever!