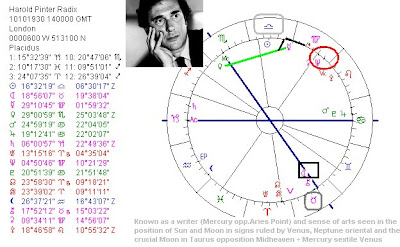 Harold Pinter died yesterday. He was a famous writer, actor, poet and director. Directors need an important Sun in their charts to lead the play in their direction. Harold Pinter had the Sun on top of the chart, square Ascendant and in Libra, ruled by Venus (planet of esthetics and style). The chart of Harold Pinter shows various talents, and he used all of them.

MERCURY FOR THE MESSENGER, VENUS FOR THE TALENT
In his chart Mercury (symbol of the messenger and the author) is important. Mercury is opposition Aries Point and rising before the Sun. Mercury rules the 5th house of plays and entertainment. And Mercury is tightly sextile Venus, the symbol of style and refinement. This aspect tells us that he had a talent (Venus) for communications (Mercury).

The artist in the chart is in the elevated Sun in Libra, conjunct the midpoint Venus/Neptune and half semi square Venus/Jupiter and Venus/Pluto.

ACTING
Sense of art is demonstrated by the Moon in Taurus, on a crucial angular spot in the chart. The Moon is the symbol of acting (of keeping memories alive and of 'pretending').

The chart of Harold Pinter does not point at one strong direction only. The various ways that he showed his talents to the world go together with various indications in the chart. All together they indicate that on his day and hour of birth it was time for the birth of a man who had talents for communications, who could draw attention, who could 'pretend' or 'act' and who could make a success of it, either way helped by the prominence of Jupiter (symbol of progress), close to the Descendant and trine the Midheaven.
Gepost door Astromarkt op 00:58