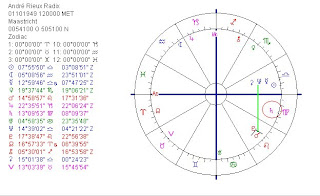 Tonight I saw a special about André Rieu, a world famous Dutch violin player, who plays popular classical music for the masses with complete orchestras and beautiful stages (with castels, flying divas and golden carriages). His son and wife take care of the show and decoration. Rieu is a million seller (25 million albums a year world wide from Japan to Canada and Australis.

Rieu (born 1st October 1949 in Maastricht, The Netherlands, unknown time) has a managing Saturn oriental (rising before the Sun). Mars is sesquisquare Zero Aries and makes a narrow sextile with Neptune. Could I read that as: musical (Neptune) instrument (Mars), please:)?

Saturn is calling and oriental, so most prominent in his chart. Where in his life do we see Saturn (symbol of management, the elderly, parents and parenthood, conservative and classical)? Of course in his music, first. He used to play in homes for the elderly first! His father conducted joyfull concerts for carnaval! André had classical (!) education in music. And his music is the music of another time period.

MUSIC
The combination of the rulers of Sun Libra and Moon Aquarius (ruled by Venus and Uranus), is what I find for musical talent. I find the connection between Venus and Uranus in almost all of the charts of popular artists/singers/musicians. Venus is sesquisquare Uranus in his chart.

SUCCES
No HOB was available and of course not everybody born that day ends up living in a sort of a castle with millions of devoted fans.
Still, on his day of birth there were so many indications in the midpointcombinations. One of them I mention here: the midpoint youd of Mercury with Jupiter and Uranus, telling us that he is inventive. And like in every chart, let us take into account that he descends from musical parents and so does his wife. Genes, circumstances and talent...added with a genuine chart produces a lot of succes in teatre. In Mozart you see the same combination of inherited talents, education and capabilities and potentials shown in the natal chart.
Gepost door Astromarkt op 05:08