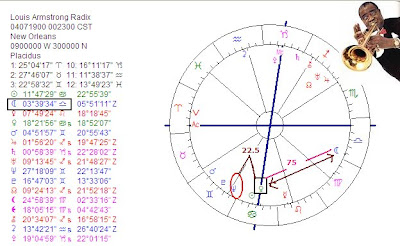 Louis Armstrong was a jazz musician and an artist. The pattern of the artist in the chart of Louis Armstrong is indicated by the same planets as in most of the charts of artists: Venus and Neptune for artistic talents. And the relationship Moon-Venus for a sense of art.

1. An angular (and crucial) Venus opposition MC
2. Venus half semisquare Neptune
3. Venus in mutual reception with the Moon in Libra (a sign ruled by Venus)
4. Venus and Moon are connected by a 75 degree quindecile (aspect in a 15 degree range) that reflects a kind of a strong focuss or obsession.
5. Venus is the only planet in a Ptolemaic (major) aspect with the MC

These are more than 3 indications and for the moment I think that is enough.
Gepost door Astromarkt op 14:29