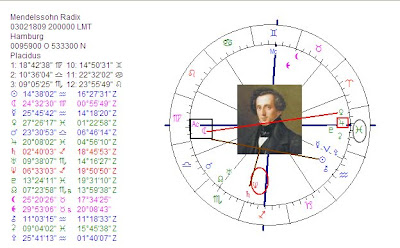 Today I heard Midsummer Night's Dream, composed by Mendelsson. Felix Mendelssohn composed the ouverture of Midsummer Night's Dream at age 17. He was a natural talent with a very rich father who gave him the opportunity to practise and develop his skills. He started young and he died young, after many heart attacks, with progressed Sun inconjunct Mars (disposing of the eight house).

His natal charts has the same ingredients for astrological talent as the charts of the other artists on this blog. The Moon, Venus and Neptune are part of the recipe, always. In the chart of Felix Mendelssohn you see them as follows:

a. as an orientation on art or ideals (Neptune oriental),
b. as a crucial education and ability to 'act' (Moon),
c. as sense of art (Moon opposition Venus),
d. added with important support and fans (Jupiter in Pisces on the DESC) and
e. not to forget: the potential for artistic talent (Venus in Pisces).
f. Neptune, conjunct Sun/Moon tells us that he was in heart and soul a romantic person or an artist...
g. There is also a potential for success in the arts symbolized by the prominence of Sun, Jupiter and Neptune and by a midpoint combination like Jupiter = Venus/Pluto.

When he started life on February 3, 1809, at about 20 hours in Hamburg, Jupiter was conjunct the Descendant in Pisces and Jupiter rules the IC. This refers to the rich family background, supporting him to become the best composer he could be. He also had Sun (semi square Aries Point) trine Midheaven, and that is an indication for a 'star status' from the start. With the Sun trine Midheaven it is easy to 'perform' and to show yourself to the public the best way possible.

Notice that the Moon is opposition the midpoints Venus/Jupiter and Jupiter/DESC so that he was loved and encouraged from the start. There is also a quintile between Sun and Saturn, for being respected the creative way and creating a relationship between himself and his parents to his benefit.

The Sun and Pluto are both related to the Midheaven. Even though the Sun is trine the MC, the combination of Sun-Pluto-MC illustrates living intensively and getting 'it all' out of yourself, with exhaustion as the price to pay. And unfortunately not only Neptune, but also Saturn is conjunct Sun/Moon! The combination of Saturn and Neptune symbolizes possible illnesses.

There is much more to say about his health and death, but this blog concentrates on art. And art is what is to be found in the chart of Mendelssohn, more than once!
Gepost door Astromarkt op 06:26