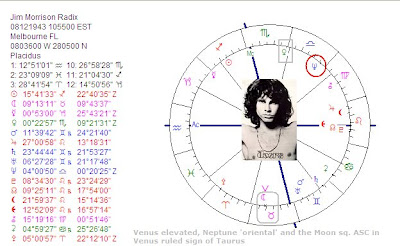 Jim Morrison was an artist and the pattern of Venus-Neptune, joined with a Moon in a sign ruled by Venus or Neptune, is visible in his chart.

Venus is on top, Neptune is the 'oriental' planet (the first planet to rise before the Sun, not included Venus or Mercury unless they are 'calling' or related to an angle or Aries Point). And the Moon is in Taurus.

Also notice the creative biquintile (144 d) between Venus and Uranus. The combination of Venus and Uranus (and/or Neptune) is frequent in the charts of those who make an art of the sound of music. Like Jim Morrison did.
Gepost door Astromarkt op 14:02