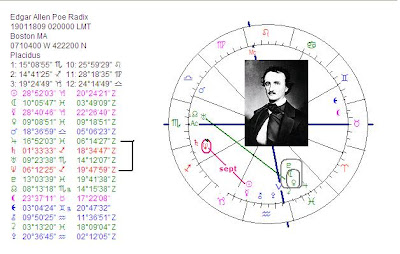 It takes fantasy to invent tales and Edgar Allen Poe had fantasy. Neptune is rising before his natal Sun and related to the Moon in Pisces. We see the pattern of artistic talent in his chart in various ways:

1. The oriental Neptune
2. The Moon is in Pisces
3. Venus in Pisces
4. Moon conjunct Venus
5. Venus square Neptune
6. Jupiter and Neptune in mutual reception (Jupiter in Pisces, Neptune in Sagittarius)
7. Jupiter and Neptune on the end of the vocational routing through the Midheaven (for having a public with fantasy)
8. And why not: Sun septile Neptune for being inspired by fantasies.
9. Venus trine Uranus (sense of rhythm, he was also a poet)
10. Sun, Neptune and Pluto are parallel (on the same level) for 'magic' and 'mystery'
And of course several midpoint combinations complete the picture of an artist who uses fantasy and 'mystery' for a believing audience.

The tightest aspects in his chart are Sun conjunct Mercury and Venus trine Uranus. He was an intellectual and fond of tension. Moon/Venus square Uranus symbolizes sense of art related to rhythm or sensations and having the need of new sensations. He had several bad habits and died young. But that is not what THIS blog is about.
Gepost door Astromarkt op 07:36