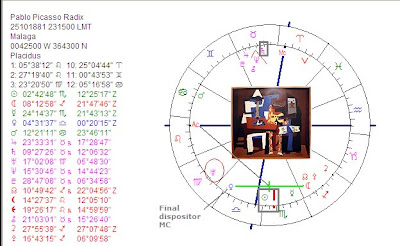 Pablo Picasso's natal chart contains information about his artistic talents. Most gifted persons have a combination of Moon and Venus and Neptune in their natal chart. So has Pablo Picasso.

1. Venus is the final dispositor of the Midheaven routing (Aries, Mars in Cancer, Moon in Sagittarius, Jupiter in Taurus, Venus in own sign Libra). That links the 'technique' of Aries MC to esthetic styling.

2. Venus is sextile Moon, reflecting the possibility of sense of art

3. Neptune is semi square Aries Point. That makes Neptune a prominent planet in this chart. Neptune is the symbol of the spiritual, immaterial and visionary world of fantasy and beliefs. Neptune's influence cannot be missed in the chart of an artist.

4. Midheaven is square midpoint Venus/Neptune. That relates the profession to arts.

5. Moon/Venus is square the Ascendant. He was a good looking and beloved young man and he was situated in the right environment to express his talents.

Picasso was a modernist, a controversial person. Uranus, planet of the controversy, is the oriental planet in his chart (rising before the Sun and Venus). His artistic parents thought him to draw by the rules. But in 1898, with progressed Venus opposition MC, he developed his own style. He knew how to draw attention (Sun without major aspects in sign or orb 5 degrees, 'calling', square ASC).

Pablo Picasso was also a sculptor. Saturn's top position and the 50% of the placements in earth signs might be debit to that.
Gepost door Astromarkt op 05:49