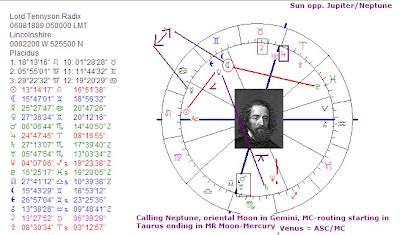 As when it seem`d far better to be born
To labour and the mattock-harden`d hand,
Than nursed at ease and brought to understand
A sad astrology, the boundless plan
That makes you tyrants in your iron skies,
Innumerable, pitiless, passionless eyes,
Cold fires, yet with power to burn and brand
His nothingless into man.

Those are famous words about astrology and they are written by Lord Tennyson in 'Maud'. He is considered to be the second best poet of England (Shakespeare is number one:). In his natal chart there are indications for his talent:

1. Neptune is 'calling' (not making major aspects in sign or orb 5 degrees)
2. Moon is oriental for the emotional approach
3. Moon and Mercury are in mutual reception: mood and intelligence, emotions and communications go together
4. Sun opposition Jupiter/Neptune: drawing attention to an audience using imagination
5. Moon/Venus is related to Mars and Uranus for a sense of art related to techniques and rythm.

If this very round hour of birth is correct, his techniques should have been crucial for his position and fame. In this chart you see a man with a vocation for the amorphous (belief, ideals or arts) and an emotional orientation. He has an audience or public. And techniques related to sense of art defined his position. What I missed in this chart was the planet of estetics and style, Venus, but my computer told me that Venus is exactly in the middle of ASC/MC.

And of course there is 'astrology' in the chart:
Uranus connected to Sun/Jupiter
MC connected to Jupiter/Uranus
Uranus on the IC
But I have no idea if he knew how to calculate or read a chart.

BTW Venus inconjunction Saturn: he married late (as his father seemed to have tried to stop it) and he had a late 'coming out' as a poet he daren't not.
Gepost door Astromarkt op 11:50