Elvis Presley was above all a succesful ‘dream’, a man on stage, an artist with an uncontrolled need for romance, privacy and ‘more’, who ignored warnings. He was also a man with a temper and with musical talents. He was all that and you can see it in his chart. In fact, he IS still a beloved and admired person. Watch his fan sites...There are even people who do not believe that he died and they keep hoping that they will see him again one day. That is the effect of being an idol. As he is not real (Neptune on top) he stayes alive in everybody's imagination.

Elvis Presley was born January 8, 1935 in Tupelo at 4u35 CST a.m. I understand much more about the man and his chart since I interprete charts using ‘prominent planets’. 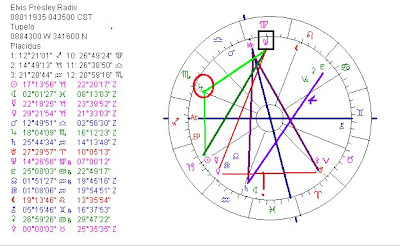 FAME AND TALENT
Jupiter, dispositor of the ascendant, is the oriental planet (the planet that rises before the Sun)in the birth chart of Elvis Presley. Neptune is on top of this chart. These prominent planets make a small trine, together with the Sun. The aspect of Sun and Jupiter is the tightest aspect in the chart (apart from the Inconjunction of Saturn and Pluto). The Sun is square the midpoint Jupiter/Neptune.

The combination of Sun, Jupiter and Neptune points at succeeding in immaterial matters such as religion, media, and movies. A prominent Jupiter indicates the international (the traveller or publisher) and Neptune on top tells us that Elvis Presley was above all an artist and romantic/idealistic. And you can see it in his natal chart.

MORE...
There are more clues for fame. In the midpoints (range of 22.5 degree etc.) I see at least 20 combinations for fame and that is a lot! For example: Jupiter 157.5 Venus/Pluto and semi square Pluto/Ascendant and Venus quintile Jupiter and opposition Pluto, all for being loved by many. In both cases the dispositor of the Ascendant (Jupiter, ruler 1) is involved.

MUSIC AND MOVIES
His musical activities are visible in the chart, too:
Venus sesquisquare Neptune
And
Venus square Uranus.

The pattern of Venus with Neptune and/or Uranus is frequent in the charts of singers.

AND MORE...
His Moon in Pisces does not make major aspects in sign or orb 5 degrees and I consider that to be a ‘calling’ Moon. The Moon is in the 3rd house of communications. This all indicates an urgent need to broadcast romantic messages at any level. The Moon in Pisces suggests a desire to pretend...the big pretender (...). And it is a good placement for an actor.

AND STILL MORE...
Neptune’s square with the Ascendant confirms seclusion and being shy, as well as the wrong image of himself that he gave. Like actors do…

Now think of the combination of these three most prominent Moon, Jupiter and Neptune. I have written in my book Astro Trio that one of the possible interpretations of this combination is having success as an artist or female (Moon) believers, fans and followers (Jupiter-Neptune).

For more about his life and death, related to astrology, go to Astropost.blogspot.com
Gepost door Astromarkt op 03:18