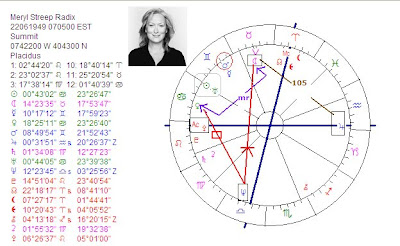 Actress Meryl Streep has Venus in the sign of the Moon (Cancer) and the Moon in the sign of Venus (Taurus). The Moon and Venus are related to each other by mutual reception. Also, the Moon is sextile Venus. This is a double statement of 'sense of art'. Moon and Venus are related to Neptune. It is the same combination of artistic talent that is in the charts of all artists, actors, musicians, composers and painters on this blog.

(Now that I am doing the 50+ chart of an artistic or creative person with the pattern of artistic talents in her/his chart, I begin to wonder about the symbol of Pallas. Pallas is often angular, it seems, in the charts of artists. And so it is in Meryl Streep's chart.)

OBSERVATIONS
Jupiter is angular, too and Neptune is positioned on the North side of the chart, while the Moon is the most elevated planet. The combination of Moon, Jupiter and Neptune promises success as an actor, as both the Moon and Neptune are symbols of 'do-ing as if' and Jupiter symbolizes successes. The Moon is related to Jupiter by one of the aspect in the 15-degree range, a 105 degree aspect. That shows a strong need for success.

SO...
The Moon is two times prominent. All the other important placements are less important than the Moon is. The Moon is in mutual reception with Venus. And Venus is exactly square the Midheaven, that is ruled by Mercury.
Communications seem to go together with sense of art...And of course, the Sun (ruler 1 and square Aries Point) cannot be denied. The Sun adds 'drawing public attention' to the rest. This is obviously the chart of a person with sense of art or style who is communicating and performing (Sun!).

MARRIAGE
Meryl Streep is one of the few actors or actresses with a long lasting marriage. She married in 1978 with Don Gummer (born December 12, 1946 in Louisville). Even though ALL of the planets in their charts don't match (for example, she has Mars in Gemini, he in Sagittarius), they stick together. 'Goodwill and willingness to bend' is the secret, as Meryl Streep told the press one day. And as a matter of facts, her Venus is exactly trine his Venus! That makes it easy to get along and love each other.
Another interesting thing is that Don and Meryl share an aspect between Sun and Uranus (they both have such an aspect in their charts). One of the reasons for the long lasting relationship is what Meryl mentioned, the fact that they are both not used to standard life and living. Here you see the advantage of a disadvantage: the hectic way of living keeps them close!:) This way of living provides them the space they need to be independent.
Gepost door Astromarkt op 09:54