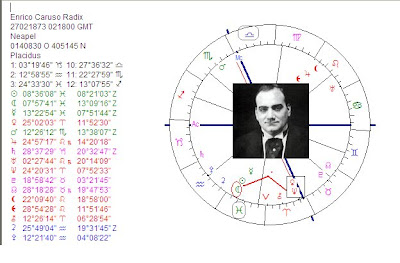 Enrico Caruso is a legendary tenor. He was born in 1873 and we still recall his name. On this blog Art & Astrology I show the pattern of artistic talents in natal charts. Part of the pattern are aspects of Moon, Venus and Neptune, prominent placements of these planets and the signs that they rule. The talent in his chart shows by:

2. Venus and Neptune opposition Midheaven
This aspect relates art to the position in society

3.The oriental Moon in Pisces
This means that he was focused on his romantic needs. The Moon in Pisces is part of the pattern of artistic talents.

5.Venus and Neptune are trine Jupiter
This says: "success in art or marriage' but the tight trine of Jupiter and Neptune also tells us that he had fans and followers or at least a devoted audience

6.Venus and Neptune are both semi square the vital midpoint Sun/Moon
He was in heart and soul an artist...

7. Sun, Moon and Mercury are in Pisces
He had a sensitive and empathic character

8. The Libra midheaven for a career in an atmosphere of style and ethics

9. Sun is semi square Venus and Neptune, biquintile Uranus and conjunct Moon
His life is dedicated to arts (Venus + Neptune), he has a creative way to make his family life hectic and exciting and to live an independent life.
He was 45 when he married.

Interesting is that Caruso had no placements in air signs. That makes us aware of the importance of communicating and relating at any level. There are at least 10 midpoint combinations that contribute to his successes.

The amount of indications, together with the number of midpoint combinations with Jupiter in this chart are reflecting the artist that we remember. The charts of famous persons are often easy to read. Their talents show immediately...
Gepost door Astromarkt op 02:44